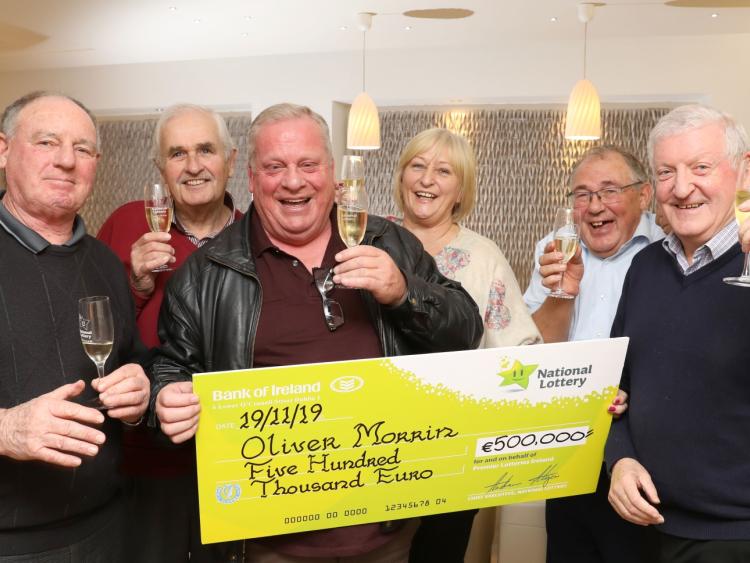 Oliver Morrin from Leixlip in Co. Kildare celebrates with friends after he claimed a €500,000 EuroMillions Plus top prize

A construction worker from Leixlip in Co Kildare has scooped a EuroMillions Plus top prize of €500,000 which he won on Friday, November 15.

Oliver Morrin (65) who works in the construction industry had been aiming to retire next year, and his pension fund has now been boosted by a half a million euros as he starts planning for his future.

He collected his bumper cheque at the National Lottery headquarters in Dublin today, along with a group of friends.

Speaking at National Lottery headquarters today, the delighted winner said, “Believe it or not, I was apprehensive about coming up to Dublin to claim this prize. I needn’t have been nervous because this has been one of the most special days of my life! A big group of us got a mini-bus up from Leixlip and the craic has been almighty. I am joined here by my closest friends and I really couldn’t have asked for a more magical experience” he said.

Oliver Morrin who is originally from Connemara in Co. Galway purchased his lucky Quick Pick ticket on his way home from work last Friday evening at the Spawell Service Station in Dublin 6W and he admitted that he has been enjoying the celebrations with his close friends ever since.

“It’s not every day that you win €500,000, that’s for sure. The very second that I found out, I decided to share the news with my family and friends. While I may have left my home in Galway nearly 50 years ago, I still have a lot of family there so I’m looking forward to getting back out west and carrying on the celebrations with them towards the end of the week,” he said.

On his plans for spending his €500,000 windfall, Oliver said that he has already put a plan in place to ensure that the money makes his retirement a lot more comfortable than he had originally planned: “I absolutely love my job and I’m certainly in no rush to retire just yet. I am fighting fit and I don’t feel like I am ready to give up work just yet. That being said, I do have a pension and all of that but this prize just ensures that I’ll be able to enjoy it that much more and maybe I’ll be able to focus on my golf a little bit more at some fancy courses,” he added.