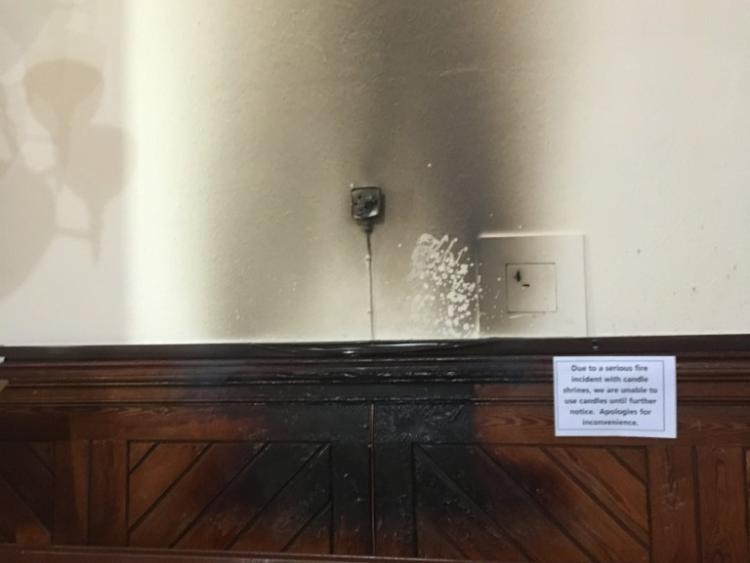 A temporary ban on lighting candles has been imposed after a small fire broke out inside St Conleth’s Parish Church last Friday, November 15.

It is understood that the small fire broke out at 5.30pm last Friday, with emergency services called to the scene.

No-one was injured and superficial damage was caused to the interior of the church.

According to Newbridge Parish Priest Fr Paul Dempsey, the source of the fire was one of the candle shrines and the fire was quickly extinquished by fire fighters at the scene.

Fr Dempsey told the Leader: “There were no injuries and the damage to the church is superficial.” He also wished to thank the Kildare fire service for its quick response to the fire.

A notice in the church informed parishioners that “due to a serious fire incident with candle shrines, we are unable to use candles until further notice.”

It is understood that repair work could cost in region of several hundred euros, although the church will be open as per usual.

Parishioners expressed relief that the church did not suffer more serious damage and that no injuries were reported. “The church is here longer than anyone can remember, it’s an important part of the local community. We’re all just very thankful that the fire didn’t spread and hopefully the damage caused will be repaired soon in time for Christmas,” said one parishioner.

“The fire on Friday was in one of the candle shrines and it was caused by normal, light-up candles. Our advice to churches is to use renewable LED candles which are safer to use. In general, church buildings in Ireland should have working fire alarms and emergency exits. Thankfully St Conleth’s Church had a working fire alarm and emergency exits which proved important on the day,” she said.

Ms Barrett also warned that candles can be ‘very dangerous’ in the home and that all homes should have a working smoke alarm, fire extinguisher and fire blanket.

St Conleth's Parish Church, which is located beside the Liffey Bridge and close to several of the town's schools, dates back to 1852. It has notable stained-glass windows and a high altar which was made in Italy.