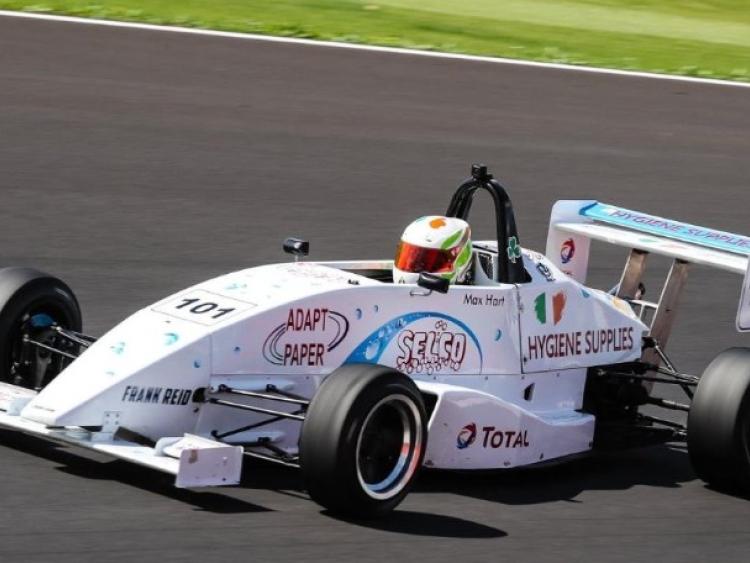 Max in action on the track

Eighteen-year-old Max Hart has been selected as the third nominee for the 2019 Motorsport Ireland Young Racing Driver of the Year for his performances in the month of June.

Hailing from Baltinglass, Co Wicklow, Max has elected to compete in the UK this season with Leastone Racing in the British Monoposto 1000 Championship where he has secured numerous podiums, including a brace of wins, which secured him second in the championship on his first full season racing outside Ireland.

In 2018, Max won the Irish Formula Vee Star of Tomorrow Championship, taking 8 wins from 12 starts in his first season in the series.

It was at the end of that season that he then decided to sample the Monoposto 1000 class in the UK. In his first race outside Ireland at Brands Hatch, without any testing at the track, Hart finished 2nd.

This gave him the encouragement to proceed with this series for 2019 and with the main championship finished, he intends to complete the six round Tiedeman Trophy Championship which takes place over the autumn and winter months of this year.

Like many young racers, Max has had to balance his racing with education and he is currently a sixth year student in Scoil Chonglais in Baltinglass.
Away from racing and his studies, Max will continue his fitness and training work as well as working with his family to secure sponsorship for 2020.

Like any single seater racer, Max would love to reach F1 but understands the barriers that exist in following that path, however carving out a career as a professional driver is definitely his aim.

The racer is backed by Selco Hygiene Supplies, Adapt Paper Products and Little Dragon Supplements and as well as their backing, Max is also thankful for the support of family members who have helped out in any way possible over the last few seasons.

Having been selected as the third nominee for the 2019 season, Max is now a contender for the prestigious Motorsport Ireland Young Racing Driver of the Year Award and the historic Sexton Trophy. This award is presented annually and is supported by Sport Ireland and Motorsport Ireland.