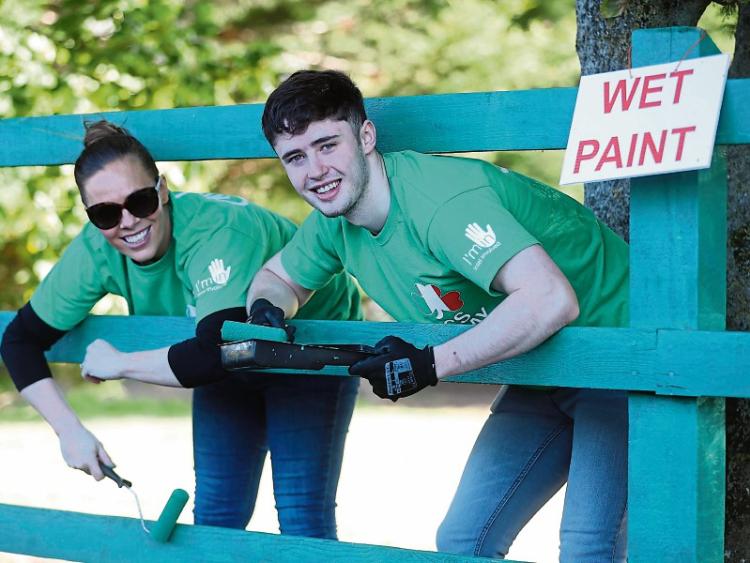 OVER 200 staff at Intel Ireland’s Leixlip base took part in a recent volunteer day to support the communities in which the company operates.

Across Intel’s 145 sites worldwide there is a network of Corporate Services employees who are responsible for everything from site selection, security, and cafeteria services to managing the Intel Air Shuttle and everyday operations. It has thousands of employee.,

In Ireland there are more than 200 CS employees working at the Leixlip campus and recently they all took part in a Global CS Giveback Day which set an ambitious target of having every CS employee across the world in community volunteer work.

SEE ALSO: 15 kittens found dumped in a yard in Kildare

Staff pooled their efforts into a number of different activities over  a short time period.

Most of them helped Leixlip Tidy Towns Association who had identified a number of different projects for the Intel team to complete.

Leixlip Tidy Towns Association chairperson, Berni Brennan, said they had a fantastic day with all the Intel volunteers. “Every group did a brilliant job and we are delighted with how well the different areas in Leixlip are looking after the projects”.

Another group of employees packed 400 food packs which were shared with the Inner City Helping Homeless (ICHH) charity in Dublin.

Intel Ireland External Relations Manager Lisa Harlow said they were delighted to be able to help. “The Tidy Towns associations do such wonderful work in our local areas and I hope that by supporting projects like this that the whole community will share the benefit. I would also like to share on behalf of Intel, our congratulations to Leixlip Tidy Towns on their recent success as gold medal award winners in the National Tidy Towns Competition.”