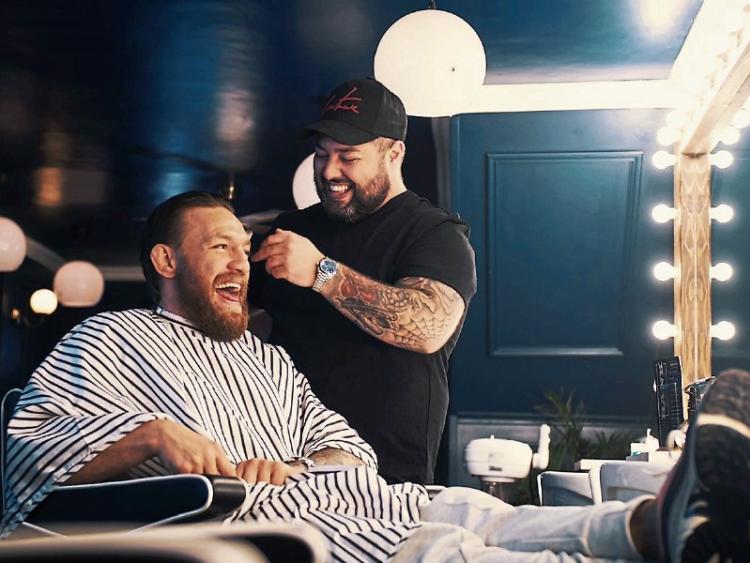 Conor McGregor has his hair cut by Craig Nolan in Naas

Mixed Martial Arts legend Conor McGregor has come to Naas for a spot of grooming.

The Notorious arrived in town for a bout of personal hairdressing at the just opened BANK, an upmarket male grooming enterprise at New Row, next door to the Indie Spice restaurant.

Blessington’s Craig Nolan, 29, is the man behind the newest business to launch in the town.

Craig has been McGregor’s personal barber for the last four years and so had an opportunity to ask the Crumlin man to sample what was on offer.

BANK is more than just a place to go for a short back and sides.

“We own and operate another barber shop in the town, Old County Barbers. The idea behind BANK is to offer a high end male grooming facility, something that would not look out of place in London or New York. Initially, we are aiming at  professional gentlemen in Naas.

"Appointments can be booked either online or by phone. When they arrive they are greeted, offered a beverage of choice and sit by the fire to watch some sports on TV. There is no waiting around, we offer luxurious shaves,  facials and haircuts for men, using the most elite products available on the market,” said Craig.

And Crumlin’s finest was so impressed he’s set to make a comeback.

“When he came in you could see that he was really taken with what he have, he said it was unbelievable. He thought it was a beautiful place and he was blown away by the finished product,” said Craig.

McGregor has previously visited Fletcher's pub in Naas, and has trained regularly at SBG Naas in Ladytown Business Park.