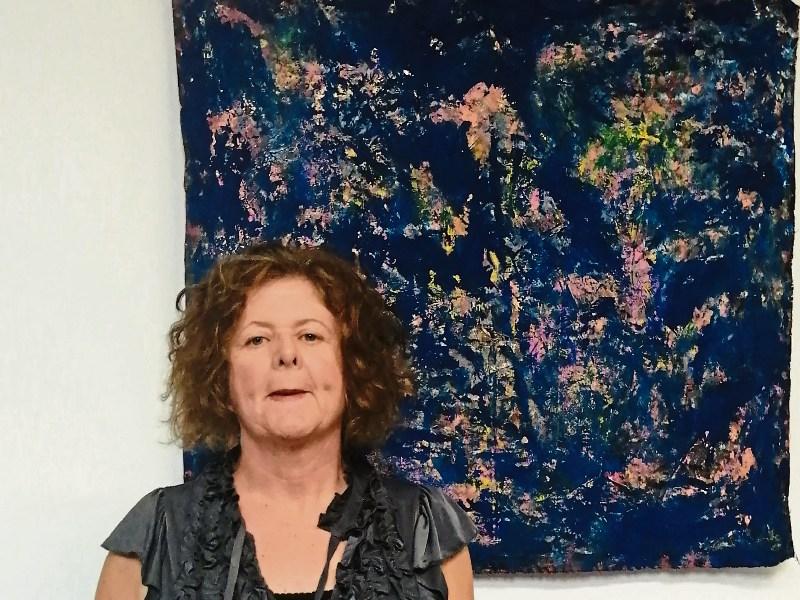 Jacinta O'Reilly with one of her works

An art exhibition styled United States of Emotion is being hosted at Naas Library.

The works were created by artist Jactina O’Reilly and the exhibition has previously been staged at three venues in Dublin, including Tallaght library.

It opened in the gallery space at the Naas venue on  September 16 and it has now been extended until October 7, during normal opening hours.

Each time the exhibition tours it contains a new body of work and existing work which is adapted to the space.

“Community interest and involvement is important to me as an artist. My interest in Naas was prompted by completing a successful project for local hospice St Brigid’s Hospice, The Curragh to which I donated four pieces.. The motivation in having this exhibition is to find suitable places in Naas community to hang further pieces and I am currently in communication with Naas Hospital about donating some work in the near future,” said Ms O’Reilly.

“I have a keen interest in hanging work in places such as hospitals and nursing homes. I have enjoyed bringing my work to Naas and would like to see the work travel further in kildare it is such a beautiful and diverse county. I lived in Australia for 17 years and now I love living back in Ireland and exploring the diversity of each county.”

The work ranges in size from very large pieces on canvas to very small canvas pieces.