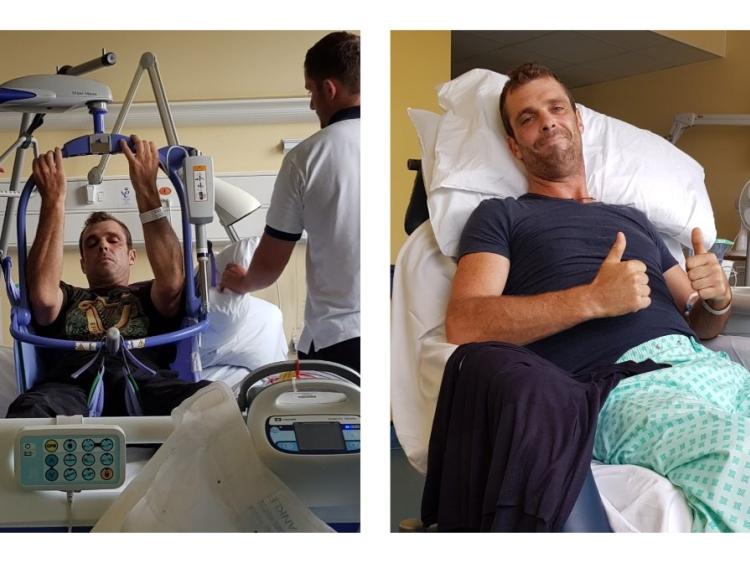 A Kildare man who was left paralysed from the waist down following a fall from a ladder will take part in swim raising money for charity next month.

Matt Walker, a landscaper from Carragh Court in Naas, will take part in the Gaelforce Great Fjord Swim in October to raise funds for Stoke Mandeville Hospital in England, where he was treated for his injuries.

Matt has been left permanently in a wheelchair after falling from a ladder on a job on August 6 2018, breaking his spine in several places.

While working in a client’s garden and descending from a ladder on a hedge trimming job, electricity arced from an above cable and connected with Matt’s machine which electrocuted him.

Knowing he had to get away from the ladder he was standing on to stop the electrocution, he consciously fell away from it, hitting the ground like a stone.

Matt was rushed to John Radcliffe’s spinal unit where the expert team completed emergency surgery on his spine, but the fall left him completely paralysed from the waist down.

After the accident, Matt spent three months at the National Spinal Injury Centre, Stoke Mandeville in intense rehabilitation where the teams helped him learn how to make the most of his upper body strength to negotiate a new life from a wheelchair.

Matt continues to work as a landscaper using Omeo, which is a two wheeled off-road wheelchair.

Part of Matt’s rehabilitation is swimming.

Along with friends, he is getting set to swim the Gaelforce Great Fjord Swim on October 12, a 750-metre open water swim from Mayo to Galway across Ireland’s only Fjord.

Matt and his team will compete to raise money to supply Virtual Reality equipment for spinal injury patients in rehabilitation at Stoke Mandeville Hospital.

Any additional funds will assist Matt with mobility equipment as well as helping to provide much desired access to his own garden at home.