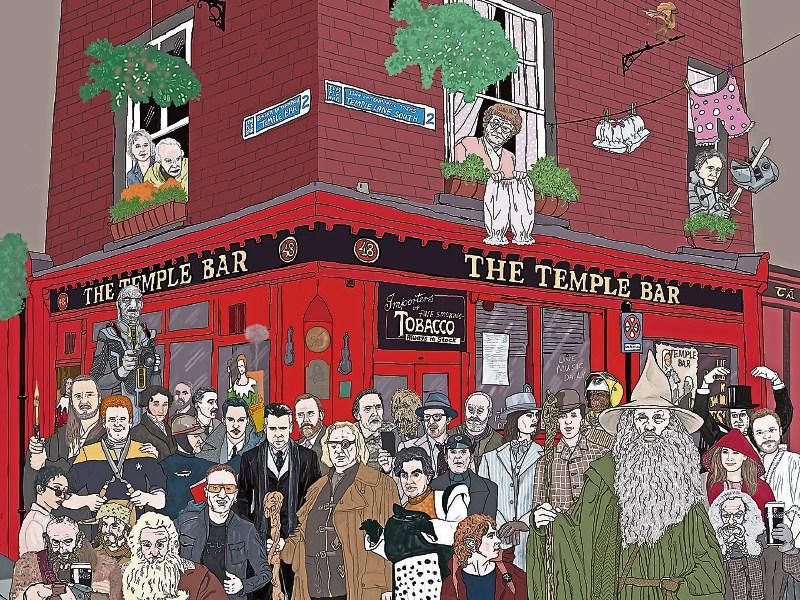 A section of Paul Sheridan's winning work of art

Kildare artist, Paul Sheridan, was delighted to pick up an art prize in the Spirit of Dublin competition at major science fiction convention held in Dublin this month.

Leixlip artist, Paul Sheridan, who said he was very grateful to receive an arts grant from Kildare County Council, to display his artwork at Dublin 2019: An Irish Worldcon, picked up prize for his painting depicting many Irish linked to Hollywood,  won the Spirit of Dublin prize for his painting "An Unexpected Pub Crawl".

Running since 1939,  the event is the largest science fiction, fantasy and horror convention in the world.

It was held in Dublin this year, said Paul,  after a group of Irish enthusiasts convinced the Worldcon attendees to vote, nearly five years ago, to hold the event in Ireland for the first time.

As a result Worldcon came to the Convention Centre Dublin and The Point Village from August 15-19, last. “I am only now just recovering from it,” said Paul.

One of the highlights of the event is the announcement of the annual Hugo Awards.

The committee representing the country it is taking place in gets the opportunity to choose an artist to design the base for the award. The committee chose Jim Fitzpatrick for Dublin 2019.

Over 70 artists from around the world took part in the Worldcon Art Show exhibition.

Paul had two full display panels which featured 18 framed paintings. The most popular with the visiting attendees was An Unexpected Pub Crawl, which shows all the Irish actors, authors and performers who have contributed to Sci Fi, fantasy and Horror since the 1800's until now rambling around Temple Bar.

It won  him the Spirit of Dublin Award for this picture.

He was delighted that artist, Jim Fitzpatrick, and Japanese artist, Sana Takeda, called into the art show to see it. “I included Jim's famous image of Che Guevara in the picture. Jim was delighted with it,” said Paul.

The now retired  Eircom staffer, who has lived in Leixlip since 1983,  has been painting for some time.

He sold the winning picture, an original,  to Disney man, Jeff Wildman, who bought one of Paul’s paintings five years ago.

Most of them have been prepared for Worldcon.

Paul said that 90% of the rights of  films using the Irish actors, including Jimmy O’Dea, who played in Darby O’Gill and the Little People, are owned by Disney. “There was a lot of fun with people guessing who was who,” said Paul.

He is currently working on a graphic novel.