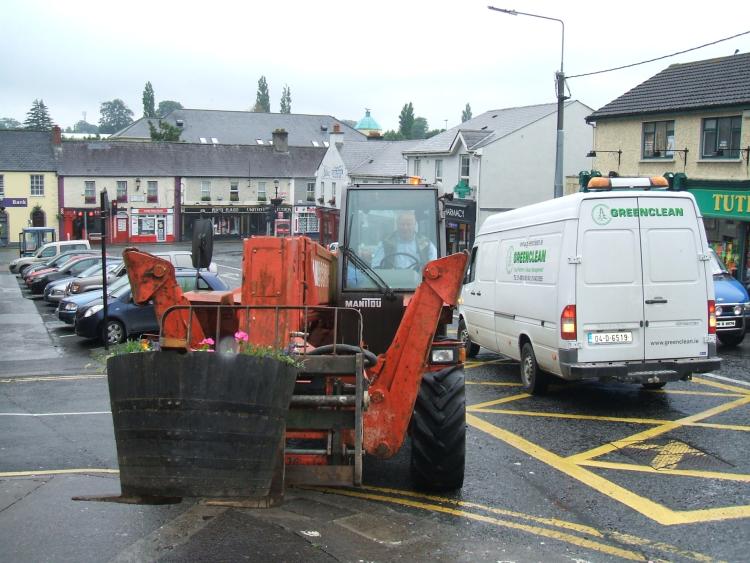 The late Paddy Hannigan lifting for the Tidy Town Association

Mr Hannigan, whose family owned the Ryevale Tavern, the Middle Shop and the Springfield Hotel, passed away on Monday night at Parke House Nursing Home, Kilcock.

In 2014, the Ryevale (and Darkie Moore’s) and the former Zinc nightclub, was put for sale and is now the site of the Aldi store and car park.

It had been run by the Hannigan family for over 60 years.

Paddy moved to Leixlip from Ballyhaise, Co Cavan, with his family in December 1949.

He was aged twelve at the time.

Well known as a hard worker all his life, he did an apprenticeship as a barman in Dublin before later succeeding his father in the family business in Leixlip.

Cllr Bernard Caldwell who knew Paddy well, particularly in connection with the Leixlip Festival and the Christmas lights said sent his condolences to the Hannigan family.

“Paddy is unique. This is a sad day for Leixlip. Nobody will replace him," he said.

Cllr Caldwell said Paddy was a great man for the community. He was one of the biggest employers in Leixlip in the 60’s, 70’s and 80’s.

“He was a great help when it came to the Festival and Christmas lights. Helping us with finance was never a problem,” he said.

“He would come with me to the forest to buy the Christmas tree  and make sure it was put up safely.”

SEE ALSO: Historical programme on the Irish Derby to air in September

“Despite his wealth, he had no notions or airs and graces,” said John, who recalled Paddy lifting a heavy half-barrel with plants for Leixlip Tidy Town Association on the Captain's Hill with his Hymac machine in 2007.

John also recalled Paddy lifting him up in the Hymac to check the details at the bell at the Church of Our Lady’s Nativity, in June 2004.

“When I told him this was as near as I would get to heaven, he immediately replied: This is heaven down here.”

Paddy is survived by his wife, Marie, children, Anne, Ger, Dee and Thomas.

His funeral takes place tomorrow Wednesday morning, August 28,  at the Church of Our Lady’s Nativity, Leixlip arriving for Requiem Mass at 11.00am followed by burial in Confey Cemetery.