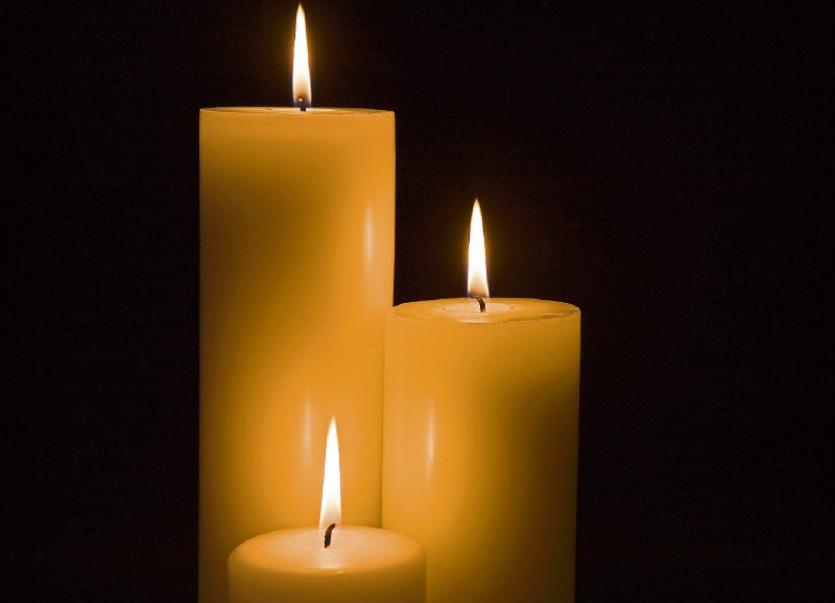 August 23. Peacefully in the loving care of the staff of T.L.C. Nursing Home, Maynooth, beloved wife of the late John and mother of the late Gary, deeply regretted by her loving daughter Susan, sons Stephen & Paul, son in law Ross, daughters in law Joanna, Rebecca & Amanda, grandchildren, sisters Moira, extended family & friends. Reposing at Reilly's Funeral Home, Woods House, Clane, on Monday from 5-8pm, with prayers at 7pm. Removal on Tuesday at 9.30am to arrive at Clane Parish Church for 10am funeral Mass, followed by cremation in Newlands Cross Crematorium. House private, please.

August 23. Peacefully, surrounded by his loving family. Loving husband of Ann, adored father of Joan, Paul, Sinead and Niamh, grandfather of Bobby and Danny,deeply regretted by his brothers Pat, Davy and Michael,son in law Tadgh, brothers-in-law, sisters-in-law, nieces, nephews and a large circle of friends. Requiem Mass on Wednesday at 1 pm in The Church of The Assumption Jordanstown (A83 YO21) followed by burial afterwards in Kilshanroe Cemetery. Family flowers only, please. House private please.

August 25. Ex Sergeant, 3rd Battalion, The Curragh Camp. Peacefully at Curragh Lawns nursing home surrounded by his loving family. Sadly missed by his loving wife Mary, sons Michael and David, daughters in law Sebrina and Paula, grandchildren Ali, Grace, Sean, Cara, Emma, Ruby and Lucy, brothers, sisters, brothers in law, sisters in law, nephews, nieces, relatives, neighbours and friends. Reposing at his family home from 4pm on Monday with Rosary at 8pm. Removal on Tuesday morning at 10.15am to arrive at St. Brigid's Church, the Curragh Camp, for requiem Mass at 11am. Burial afterwards in Holycross Cemetery, Suncroft. Family flowers only please. Donations if desired to 'The Friends of Naas Hospital’. Donations box in church.