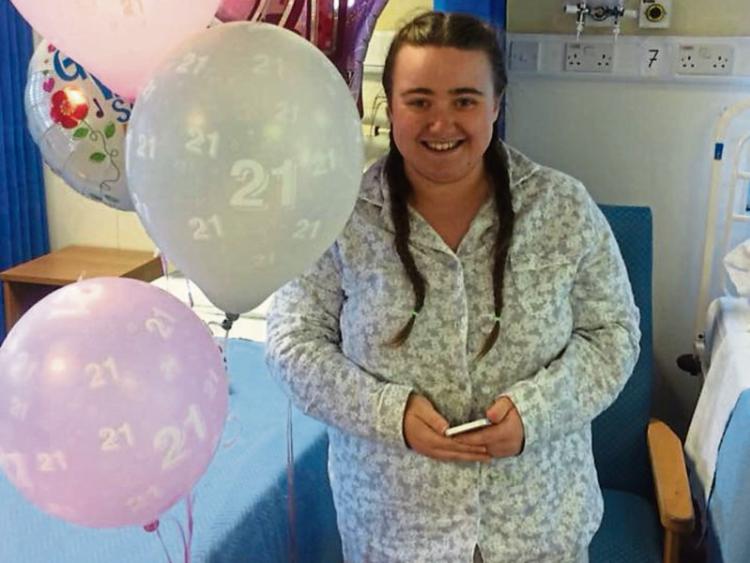 Danielle Mangan from Newbridge celebrated her 21st birthday in hospital

A Co Kildare woman with epilepsy is hoping to spread awareness and educate others about living with the neurological disorder.

Before her first seizure in September 2017, Danielle had no signs or symptoms.

“I was always healthy, I was never in hospital. My first seizure I had on the bus to my first day of college,” she said.

“I was brought into St Luke’s Hospital (Kilkenny) and they said a lot of people can just have one seizure due to anything from stress to anxiety."

Ms Mangan said she underwent a CT scan and everything came back normal. “So I was sent home after two days.”

However, Ms Mangan continued to have seizures so she went back into hospital where she had an MRI scan.

This showed she had a Grey Matter Heterotopia.

“It's brain tissue clumped together in the wrong place of the brain, known as nodules. Doctors believe I was born with it but it took twenty years for it to have an effect on me,” she added.

This year, she was officially diagnosed with Frontal Lobe Epilepsy, which she says means that seizures stem from the front part of her brain.

Ms Mangan said the diagnosis has changed her whole  life.

“It’s definitely changed my life completely. Before I started having seizures, I was able to go out with my friends, drink and socialise, and just simple things like leaving the house.

“I started having panic attacks when I was diagnosed, because of the fear of not knowing when you’re going to have a seizure.”

“There’s loads of things I can’t do by myself, things like working, I had a job and I was having seizures in the job so I got let go.”

Ms Mangan said there is always that thought in her head that she may not wake up in the morning.

“It would be life-limiting at the moment but there’s a thing called SUDEP (Sudden unexpected death in epilepsy) and here is a possibility that I could just die unfortunately, it’s rare but it happens.”

Since being diagnosed, she has been sharing her story of acceptance through a blog called Do A Little Dance.

“I was told by counsellors that I wasn’t accepting that I have epilepsy, I just assumed this would stop, so I started the blog just to kind of talk to myself.”

Ms Mangan said she ended up getting a few views, and now gets loads of messages off people with epilepsy.

“It’s good to get a good thing out of a bad situation”, she concluded.