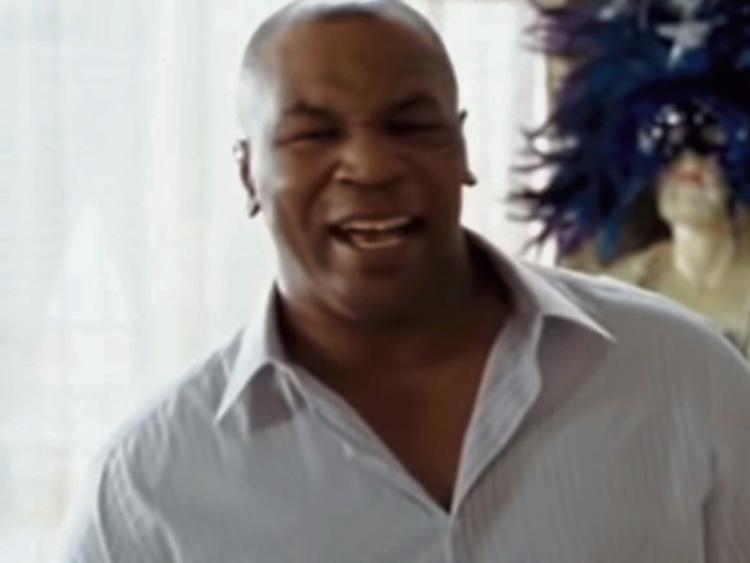 Former boxer Mike Tyson making an appearance in The Hangover

A man who told gardai he was Mike Tyson has been jailed for a total of three months.

The man, who came before Naas District Court on theft and public order charges, has been jailed for a total of four months, one month on each of four charges.

At the sitting held in Naas on August 8, the court was told that 34 year-old Brendan O'Brien, with an address given as 710 Ashgrove, Derrinturn, had breached laws in Kildare town and Rathangan.

Garda Sergeant Jim Kelly said on July 3 last, gardai went to Nolan's in Kildare town at 4.15pm in the afternoon.

They found Mr O'Brien there and he was intoxicated.

Sgt Kelly said Mr O'Brien gave them a false name, telling them that he was Mike Tyson.

Sgt Kelly said that Mr O'Brien was charged with thefts of alcohol in Rathangan and for a public order charge in a pub in Kildare town.

He had taken slabs of Bulmers cider, from Londis, Rathangan, on June 15 2019.

There was also a charge of the theft of two bottles of WKD from Centra, Rathangan on July 31 2018.

One of these was for theft and 13 were for public order offences.

The most recent offence recorded was at Tullamore District Court on July 10 last when Mr O'Brien received a six month suspended sentence for assault.

He also had a road traffic conviction for driving without insurance and had a conviction under the Misuse of Drugs Act.

Aisling Murphy, BL, who was legally representing Mr O'Brien, said her client was a 34 year-old man who has three children, aged 14, 10 and 9.

She said he was separated from his wife and had began drinking quite heavily.

Ms Murphy said her client was going to live with his mother.

She said the thefts were due to his alcohol problem.

She said Mr O'Brien was very apologetic and said he would pay back the store.

Ms Murphy said he receives €205 a week in socialwelfare.

Judge Miriam Walsh gave him a one month sentence on each of the charges — public order and giving a false name to gardai at Nolan's and the two thefts.

Three of these sentences are consecutive and one is concurrent.

This results in a three month sentence.