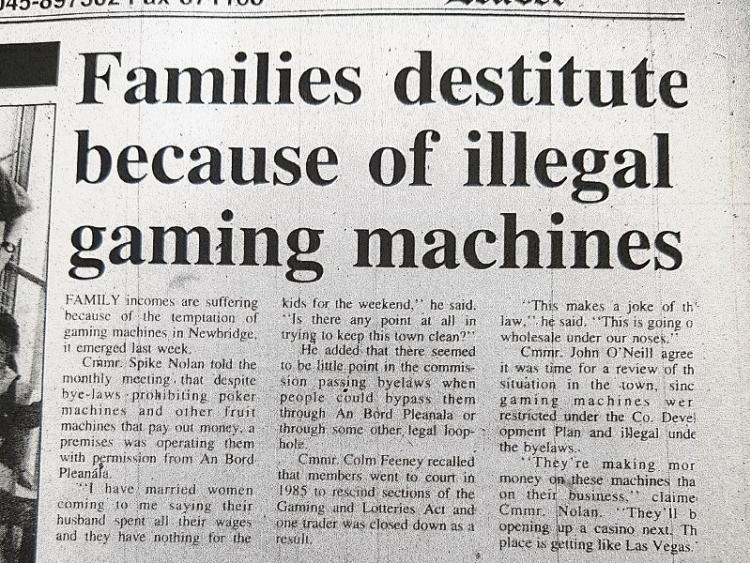 The article from 20 years ago

Theresa Murray takes a look back at how worries of the effects of gaming machines on family finances were expressed in Newbridge 20 years ago.

Family incomes are suffering because of the temptation of gaming machines in Newbridge, it emerged last week, the Leinster Leader reported on August 6, 1999.

Cmmr Spike Nolan told the monthly meeting that despite bylaws prohibiting poker machines and other fruit machines that pay out money, a premises was operating them with permission from An Bord Pleanála.

“I have married women coming to me saying their husbands spent all their wages and they have nothing for the kids for the weekend,” he said. “Is there any point at all in trying to keep this town clean?”

He added that there seemed to be little point in the Commission passing bylaws when people could bypass them through An Bord Pleanála or through some other legal loophole.

Commissioner Colm Feeney recorded that members went to court in 1985 to rescind sections of the Gaming and Lotteries Act and one trader was closed down as a result.

“This makes a joke of the law,” he said. “This is going on wholesale under our noses.”

Commissioner John O’Neill agreed it was time for a review of the situation in the town since gaming machines were restricted under the County Development Plan and illegal under the by-laws.

“They’re making more money on these machines than on their businesses,” claimed commissioner Nolan. “They’ll be opening up a casino next.