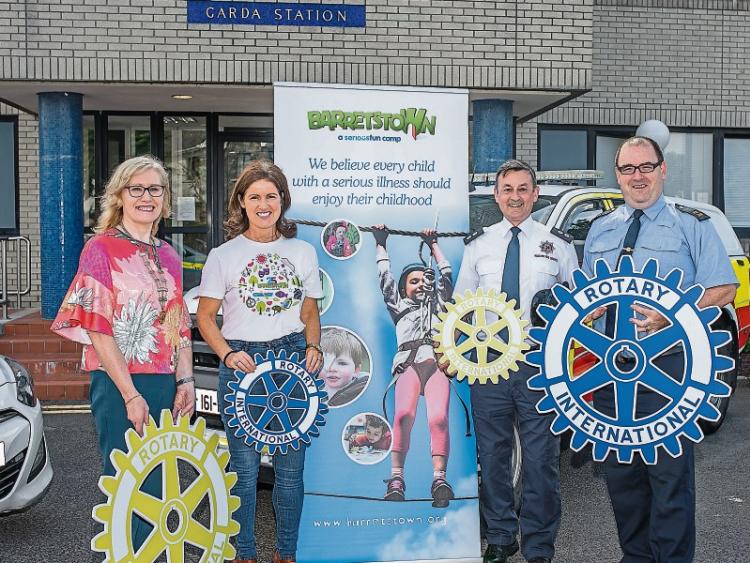 The event was launched at the garda station in Naas yesterday. Picture Ben Kelly

The second Naas Community Fete takes place on August 17 starting at 12 and finishing at 5, it again promises to be a great day out for all the family.

The event celebrates the community along with the 25th birthday of Barretstown, the not-for-profit camp for children with serious illness.

It’s being organised by Rotary Naas and An Garda Siochana and “brings together much of what makes County Kildare, and especially Naas, a great place to live in together.”

President of Naas Rotary Michele Furey said the event is “a fabulous family fun day out.”

Last year the crowds enjoyed music and entertainment of the main street, which will be closed to traffic, and t members of the Defence Forces, Civil Defence, Fire service and Coast guard along with gardai with mounted and dog units.

“It is a great opportunity to meet the community in such a fun way and it gives young and not so young a chance to meet their local gardai. We are really excited to be able to assist in putting together this event which brings so many groups from our community together,” said Inspector Oliver Henry.

A second stage will be erected and more community groups and organisations will be there along with local musicians - with a surprise act to finish off the day.

The attractions will include Defence Forces vehicles including the historic Sliabh na mBan armoured car (which escorted Michael Collins on the day he was shot), a vintage steam engine, restored fire engines, a penalty taking competition and Naas retailers exhibiting their wares.