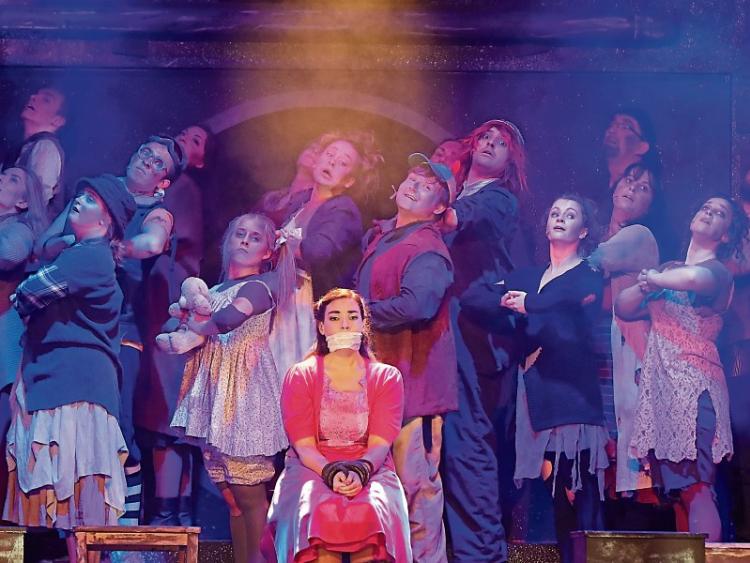 Newbriddge Musical Society members in their recent production of Urinetown

Newbridge Musical Society has announced that it will stage the iconic West Side Story next year, in what will be the group’s 40th production. The society has taken to the stage at Newbridge College Theatre every year since 1981, and is celebrating its 40th show by producing one of Broadway’s most celebrated and famous musicals.

West Side Story centres on the whirlwind romance of Tony and Maria, whose love attempts to cross a divide forged by the intense rivalry of two New York gangs, the Jets and the Sharks. Set in the mid-1950s in Manhattan’s Upper West Side, the show has come to be regarded as one of the greatest musicals of all time, with its 1961 film adaptation winning 10 Academy Awards. West Side Story’s explosive choreography, gripping story, and acclaimed score have combined to ensure its enduring appeal, while its message about the devastating effects of poverty and prejudice remains as relevant as ever.

Last month, Newbridge Musical Society won the prestigious Best Ensemble Award at the Association of Irish Musical Society Awards for its recent production of the irreverent comedy Urinetown: The Musical. However, the group’s focus has already turned to preparing for its next production, which will run from April 13 to 18 next year.

Speaking on the announcement, Society chairman Conor Kilduff said: “Being our 40th production, we wanted to choose a particularly special show — something that’s both classic and modern. West Side Story has been around a lot longer than our society has, but its script and its music feel so fresh they could have been written yesterday. There’s been an absolutely fantastic reaction to the announcement amongst our members, young and old, which shows how universally West Side Story is loved.”

The society will hold auditions for West Side Story in September, and director Sharon McNamara is encouraging everyone with an interest in stage to attend. “We are always open to new members, and the society is an extremely welcoming one. I have yet to meet someone who hasn’t enjoyed performing with us”, she said. Auditions will take place on September 15. Visit www.newbridgemusicalsociety.com for audition details.