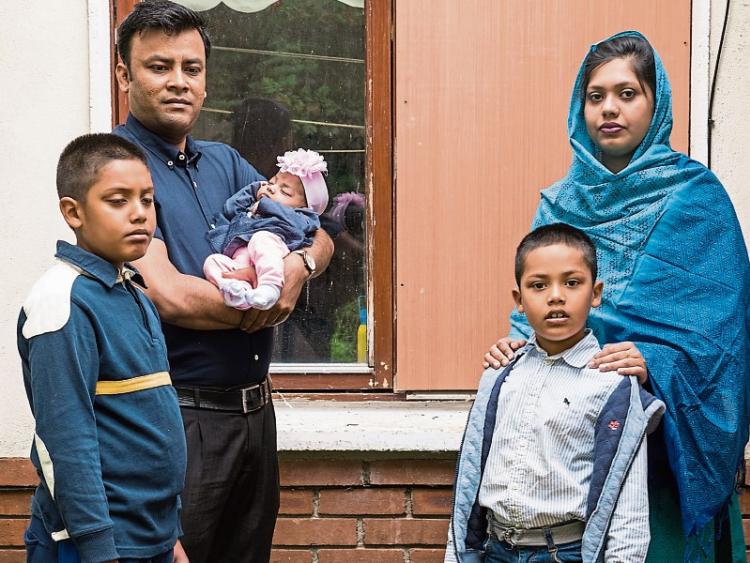 There has been widespread condemnation of a mindless attack on a Naas home last week (July 10).

A newborn baby girl had a lucky escape when an iron bar - eight feet long section of steel piping - was flung through a bedroom window at the house.

The incident happened at Cill Corbain, the housing development nearest to the unopened Naas Shopping Centre. And it has prompted new calls for the NSC to be sold.

Her father Jashim Uddin said he was talking to a plumber who was working at his rented terraced dwelling when the incident happened.

“I heard a crash and saw the bar had come through the window. Luckily there was nobody near at the time but our six weeks old daughter could have been in the room. I believe if the bar had hit me or the plumber who were closest to it, it could have killed us and there was glass shattered on the floor and on a bed,” Mr Uddim told the Leader.

Plumber Tom McHolmes detained a 19 years old youth at the scene until the gardai arrived.

Mr Uddin said the missiles are being thrown from the shopping centre premises into the neighbouring homes frequently and as a result some of the properties have been damaged.

The shopping centre is, according to Kildare County Council, about to be sold. Neither the National Asset Management Agency nor the receiver appointed over a year ago has commented on when or if the building will be sold.

Naas Mayor Carmel Kelly said the incident was a terrifying one for the family and she condemned those who were involved.

Mayor Kelly said the incident underlined the need to sell the building.

“This was a dreadful act and the family are fortunate nobody was injured. But what is needed is a "for sale” sign at the building. We have been waiting a long time for it to be sold,” said Cllr Kelly.

She added: “We have been told repeatedly that the centre would be up for sale and I believe that there are parties interested in buying it but it needs to go on sale soon.”

Mayor Kelly said she had only recently raised the issue of the sale with a senior KCC official.

Deputy Mayor Fintan Brett said: “I utterly condemn this act of brazen stupidity, It will be abhorred by everybody.”

He urged NAMA to facilitate a sale of the premises as soon as it can do so.

“We need to see the building brought to the market; it’s been lying empty for about ten years now and it is an eyesore."

He said he would raise the issue with the gardai at a scheduled meeting between local gardai and KCC officials and councillors.

Referring to a fire which took place there almost two years ago to the day he said “this is not the first incident of its kind we have had there and more recently glass panels have been smashed."

For a period up to recently a security company provided staff at the building and signs were erected on centre’s perimeter fence urging people to stay out.

Mr Uddin said stones, bricks, light fittings, timber pieces even a chair and table have been thrown at houses in Cill Corbain. He is the manager of the Swapna restaurant near Naas’ Moat Theatre.

“It has happened many times and we are now very afraid. My wife Shamima is afraid to go outside, especially into the garden for fear that something more will be thrown in and I’m also afraid for my two sons aged six and eight who could not sleep last night,” added Mr Uddin.

Most of the people living there are of Bangladeshi origin, though many are Irish citizens.

Mr Uddin said he could not say if the incidents are racially motivated.

“I don’t know why they are doing this,” he said.

It understood that the gardai attended the scene and a youth has been interviewed.

According to a garda spokesman, the investigation is ongoing.

Coincidentally the restaurant he manages was targeted by thieves in an incident four months ago.
A large window was smashed to gain entry.
Some €600 in cash was stolen and Mr Uddin estimated the cost of replacing the window at €500 to €600.
It was the third time in as many years that the restaurant nad been broken into.