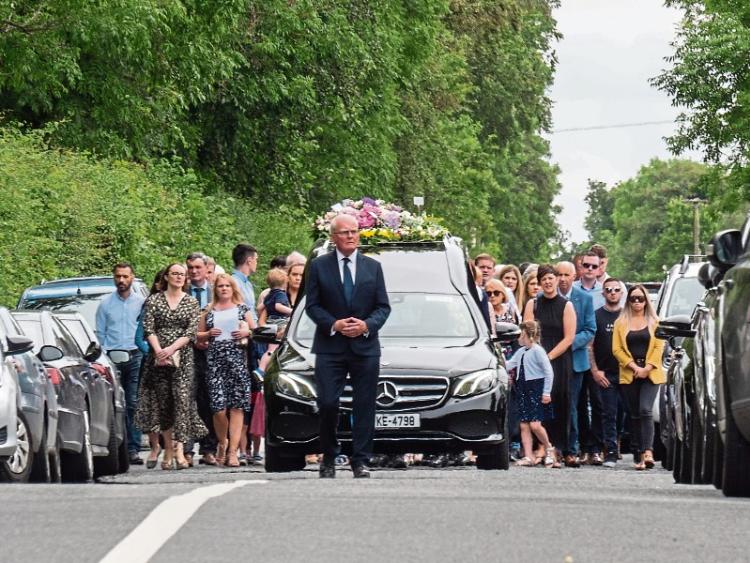 The funeral of Alan Mahon last Sunday in Kildangan

“He was taking on an adventure few would have the courage to even consider,” Fr Adrian Carbery said when he spoke about Monasterevin man, Alan Mahon, 40, who died after he got into difficulty descending Mount Erebus in Russia on June 30.

“Alan lived according to the word of God and may it now bring him to the fullness of life,” the parish priest of Kildare, Kildangan and Nurney, told the congregation at Our Lady of Victories Church on Sunday at the start of Mr Mahon’s funeral mass.

People had come to pay their respects to a wonderful man and offer their deepest sympathy to his wife Deirdre, and children, Nora, Alice, Ollie, and family.

Symbols of Alan’s life - a family photo, a Monasterevin and Kildangan GFC jersey, and a memory of his time in the motor trade — he was dedicated to his work — were brought to the altar. A symbol of his outdoor life, which brought him great fulfillment, was also brought up by family and friends.

“Alan was a natural leader who inspired his team around him,” said Fr Carbery.

Fr Carbery, who concelebrated the funeral Mass with Fr John Dunphy, Graiguenamanagh (who has Monasterevin connections) and Fr Liam Merrigan (Monasterevin) said it had been a week since Alan died in an effort to climb Mount Elbrus in Russia.

Alan, he said, had left them full of energy, excitement and plans.

“He was taking on a great adventure few would have the courage to even consider.”

He said the Kildangan resident was “so well known and loved.”

His death was the “stuff of nightmares”.

Alan, he said, was “extremely popular, full of life and excitement both in sport and work. He had a great way with people.”

Fr Carbery said he lived for his wife and children and loved them deeply.

“He used his God given talent for others. Little did he know as he set out for Mount Erebus mountain that it would take him to the highest mountain with God,” said Fr Carbery.

Fr Carbery told us that life is a fragile gift.

“We should be grateful for it every day and use it well. Alan had achieved a lot in his fruitful life. He he is a peace with God.”

Fr Carbery said Alan would be very proud at the way his family had opened their door in their home during the past week and the hundreds of people who had come to pay respects.

“He will be proud of them as they are always proud of him.”

In her beautiful words of tribute, his wife Deirdre, told how she met “my Al” on September 26 1998, just before the Kildare-Galway All Ireland final.

She recalled those early years and how they traveled around the world together.

This included Asia in 2003 and later they did Australia, on very low budgets of which Alan was proud, clocking up 24,000 kilometres in four months.

She told the congregation Alan worked for Fitzpatrick’s for 15 years and thought so highly of them and his work colleagues were “ like family.”

She said it took them three and a half years to build their house that they have lived in for the last eight years.

“There are so many special memories there. We did it all together,” she said.

Describing Alan, Deirdre said: “He was always a good person. No bad words.”

She recalled being told by someone they “had never seen a bride so excited to be married.

“Al”, she said, “did not like the limelight. He preferred to work behind the scenes in the background. He had such a kind nature.”

She said he was always such fun and could give her belly laughs.

She recalled how excited he was heading off for Mount Erebus to climb the mountain.

She thanked everyone who was so kind in minding him and making sure that he came home so quickly.

“My life changed last Sunday night,” she said. “I am still trying to deal with it and wonder why it could happen to someone like Alan.”

She said she worried their children would forget him.

“Alan I will try to bring them up with you in their memory.”

“Everyday I told Al, I told you I love you, even when we argued. You would say you loved me, even when we fought. You are my very best friend and soulmate. I am very proud to have been your soulmate for the last ten years. You will always be my Al,” she concluded followed by tremendous applause from the gathering.