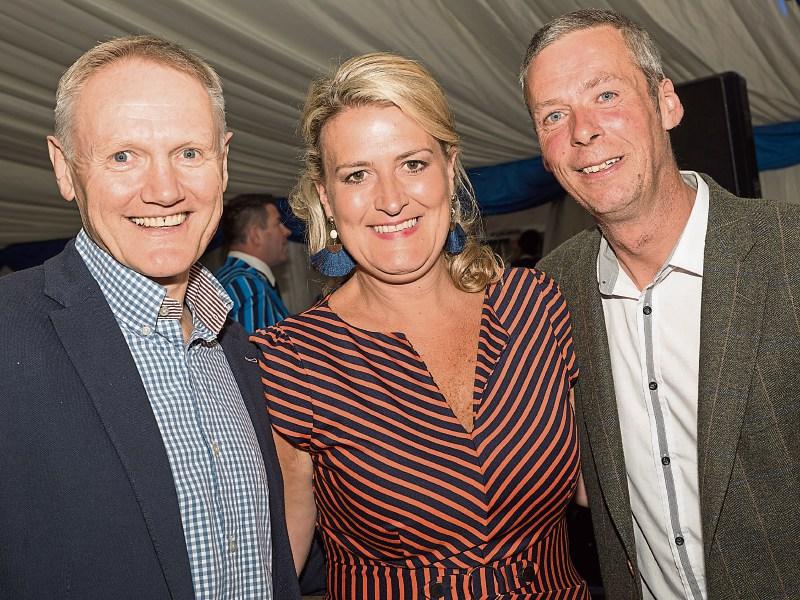 It was a very proud day for our club, Eddie Fitzgerald, told the huge gathering at MU Barnhall’s 50th rugby celebration on Saturday.

An appeal went out to Joe Schmidt to bring back Trevor’s son, French U.20 international, Daniel Brennan, and his second son, 17 year oldJosh, just called into the French U.20 squad. Such a scenario was not ruled out.

The Ireland manager did leave the question open stating they “could find a green jersey for you at some stage.”

Trevor  entertained  with  stories from his playing days, including one from his earlier Toulouse days when he was asked to take care of the opposition number 10 but waylaid his own No 10, Freddie Michalak instead. “I could barely speak English leave alone French,” fluent French and English speaker, Trevor, said.

Recalling his early days playing with Barnhall he said: “The showers were either cold, very cold or f…… freezin.”

He said he saw Barnahll’s first team  rise up six division in five years but the club was not just about 15 players but a whole group, including Christy (Dunne) marking out the pitches

Trevor’s famous push over try against Scotland in 1995 was recalled and Liam Toland reckoned that Trevor was more Munster than Leinster. He also said Trevor should have got between 60-80 caps for Ireland and should have gone on a Lion’s tour.

Joe Schmidt said it was “incredible” to have 900 players at different levels including the special abilities, the Barnhall Buffaloes.

MU Barnhall is has been much more than a school for top players or good tacklers.

But from the start of Barnhall, recalled Eddie Fitzgerald, there were some famous names.

He told us there was “much hilarity” when it was suggested that there should be a rugby club formed from among the staff at the former Irish Meat Packers plant, which stood on the now former Hewlett Packard plant. There was a request for people to put their names up on the noticeboard and Mickey Mouse and Donald Duck signed up, he told us.

The pair never took part in the initial Dublin Business Houses league, which the club entered on the basis that part of Leixlip (the Salmon Leap pub and the Springfield Hotel) was within the Dublin border.

The club bought it current landbank in 1988 and became a senior club in 1991.

The club linked up with Maynooth University in 2009 and Prof. Philip Nolan told the gathering that MU Barnhall  is “what a club with a fantastic community base looks like.”

Sculptor and former MU Barnhall President, Jarlath Daly, who made a presentation of a sculpture to Joe Schmidt summed up his view of Barnhall history when he said: “We were formed in a slaughterhouse and we ended up in a university.”