A KILDARE MAN IN LONDON: Derby memories and a whip mystery 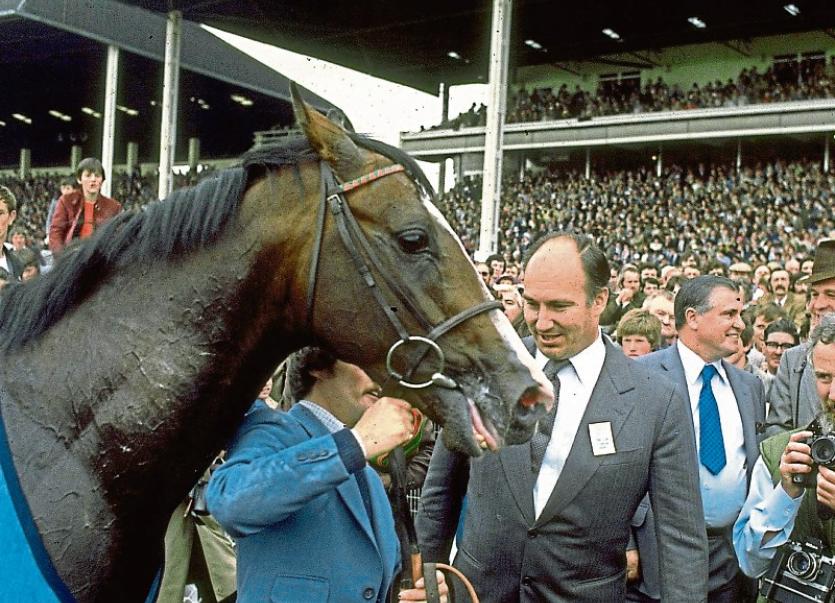 The Aga Kahn with Shergar at the Curragh

Our friend’s Dad used to do security at the Irish Derby. He was a garda. And it was the gardaí who looked after the Aga Khan when he arrived over to the Curragh.

The Aga Khan owned Kahyasi, who won the Irish Derby in 1988.

What I remember most about that race is hearing how, in the final furlong, a jockey lost his whip at a critical moment. Later, the same whip was recovered by my friend’s father, the garda, and it lived forever after on the mantlepiece of their home across the road from us in Naas.

Post-Kahyasi winning the race, we used to gather around the whip like you would a precious artefact — only the homeowner couldn’t be 100 per cent sure who the whip had belonged to.

Or, Walter Swinburn maybe — known as The Choirboy and Shergar’s former race-rider?

No one seemed certain, and time marched on.

I remember when Alan Munro rode Generous to win in 1991. The weather was so bad it looked and felt like winter on the Curragh.

The Derby was a much bigger deal then.

We used to look at the horses being loaded into their stalls from the window of our car as it wound its way to my relations’ home in Offaly.

At the time, it seemed inconceivable that Pat Eddery would ride this same champion horse just a few miles out the road.

And Commander in Chief won the Irish equivalent, of course.

I had yet to go from looking out the window of the car to Offaly to actually going to the Irish Derby, but I’d made a Curragh debut of sorts in the form of the early June meeting in 1994, and I’d felt the pinch of adrenalin triggered by the sight of a line of horses sprinting from beyond the horizon in the direction of Kildare town.

Desert King’s victory in 1997 was the first Irish Derby win I witnessed at the track. I was down the rail by the winning post. It was a neck-craning thing.

The same afternoon, a beautiful-looking woman got the tail of her dress caught in the escalator that used to go from the track to the bar upstairs in the grandstand.

The escalator was all tangled cogs, shredded frills and punters leaning over the balcony for a gawk.

On the way to the Keadeen afterwards, someone crashed into the back of the car I was travelling in. No one made a big thing out of it. We just ditched the car and walked the rest of the way.

When Dream Well won in 1998, I remember people saying they only backed him because of how well he looked in his photograph in the programme.

From that day on I started buying programmes.

By 2002, we’d left behind the post-race celebrations at the Keadeen and instead started repairing to Johnson’s pub by the bridge on the way out of Newbridge.

This was pre-Aidan O’Brien’s utter dominance of the race, and prior to me leaving for England.

Being here, I missed all his victories since, but by then at least I’d managed to find out the answer to the question that had been bugging me for all the years in between: who it was that lost his whip?

It was Richard Quinn the rider of Insan. He’d been beaten by a short head.

God knows where the whip is now.

Robert Mulhern is a London and Dublin based journalist contracted to Sky News.