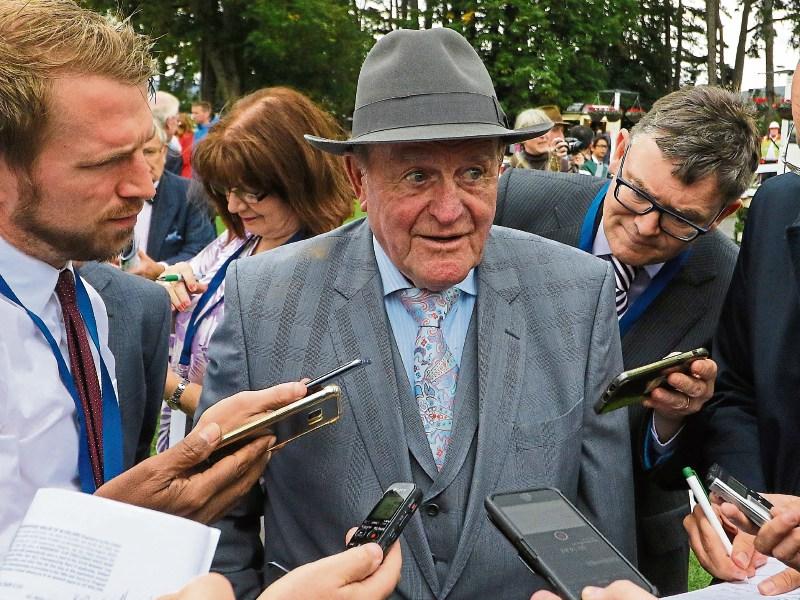 While Aidan O’Brien dominates proceedings for this year’s Irish Derby with six of the 10 runners, the story for the neutrals is that of 86-year-old trainer Kevin Prendergast.

Having followed in his father Paddy’s illustrious footsteps for the last 56 years in the training game, both the Epsom and Irish Derbies have eluded him.

The son of the famous Darkie Prendergast, Kevin has trained thousands of winners in Ireland, including winners of Irish 1,000 Guineas, 2,000 Guineas and the Tattersalls Gold Cup. He won the 1977 English 2,000 Guineas with Nebbiolo and has picked up winners in the UAE, America and Australia amongst others.

His father Darkie was a trailblazer in the 1950s and 60s, becoming the first trainer from outside Britain to claim the British Champion Trainer’s title in 1963, the same year a 30-year-old Kevin came out from under his wing as assistant to train in his own name, much like Aidan and Joseph O’Brien in recent years.

While Darkie took the British title again in 1964 and 1965, Kevin burrowed his own path and claimed his first classic with Pidget in the Irish 1,000 Guineas in 1972. He’s now won eight Irish classics and one English one, and in early June of 2019, he came agonisingly close to claiming his second across the water with Madhmoon, just a month shy of his 87th birthday.

Madhmoon was the great white hope for Prendergast to get that famous name on the Epsom Derby trophy, just about the only race to also elude his father. Chris Hayes gave the talented horse an expert ride, holding him up at the back for much of the 1M 4F trip.

Rounding Tattenham corner, he was fully ten lengths behind the leaders as they got to work. He looked in trouble and sentimental backers were seconds away from discarding their slips when Hayes rocked in the saddle and sparked an unmerciful change of gear from his charge.

He was soon back on the bridle and weaving through traffic as he geared up for the final two furlongs, a point at which he had to force his way between rivals to get a clear run home.

He got his head in front and stayed on gallantly, but while he held a wall of Ballydoyle horses behind him on the outside, another O’Brien runner, Anthony Van Dyck, slipped up the rail and took the race from under their noses.

Ever the professional, Prendergast was quick to dismiss disappointment in favour of an upbeat assessment after the race. He said the horse had “run a good race” and “couldn’t be in better shape” to size up the rest of the season, his undying love of the sport evident in such gritty resilience.

His father Darkie won four Irish Derbies during his long and stellar training career, starting all the way back in 1950 with the aptly named Dark Warrior.

Almost 70 years on, and without an Irish Derby under his belt, Kevin Prendergast and Madhmoon would no doubt be the most popular winner on Derby Day next Saturday week at the Curragh.

It would crown a 32-year relationship between Prendergast and Sheikh Hamdan.

Prendergast trained Madhmoon’s mother and her mother before that when they were taking their chances in places like the Curragh. He describes the Sheikh as a great man and friend and the family feel to Friarstown goes far beyond the back-and-forth between owner and trainer.

Kevin’s current top jockey Chris Hayes has been knocking around the yard since he was a 15-year-old. They have the sort of upfront relationship of a father and son with Kevin reluctant to shower him with praise, but at the same time always nurturing, and — putting it plainly — matter-of-fact with his feedback.

Chris Hayes famously recalled that even after he had ridden Awtaad to Irish 2,000 Guineas glory in 2016, Kevin was still chipping in with a little dig.

In the Irish Racing yearbook of 2017, he spoke of the aftermath of the race: “I shook his [Kevin’s] hand and said ‘well done.’ He shook my hand and said ‘you went too soon.’”

Nevertheless, Kevin describes Hayes as a “good lad” and no doubt he’d doff his famous cap to him if he could guide Madhmoon to Irish Derby success on June 29.

That racecourse chivalry is a virtue passed from father to son, as is the art of training racehorses, and Kevin inherited both in spades.

If last year’s win for Joseph O’Brien was a signal of the new generation in Irish racing, a win for Paddy Prendergast this term would perhaps be the swansong of the old stock.