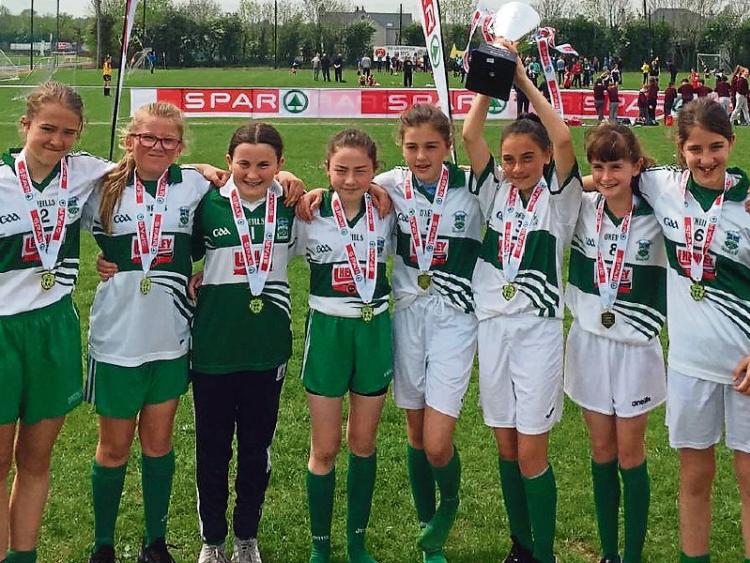 The Sallins under 11 girls side

A group of Sallins footballers are basking in the glory of All-Ireland success this week.

The under 11 soccer team attend the local primary school and defeated the Cork representatives in the deciding game.

The Cork girls went 1-0 ahead, forcing a Sallins comeback and they got the winning goal shortly before the end. On the way to the deciding game, Sallins girls also accounted for  Donegal on a 5-4 scoreline.

They also defeated Salthill, representing Galway, by 5-0 at the round robin All-Ireland finals, hosted by the Football Association of Ireland at the Aviva stadium on Wednesday last.

“We returned to Sallins as all Ireland champions. It was a great day and lots of memories were made for the players. We had to win our last match to secure the title a very intense game. Cork went in front and we had to recover to equalise and in the last two minutes we scored the winner with a header,” said Mags Griffith, who coached the team with Peter Kelly.

The team reached the closing stages of the All-Ireland competition by winning  the Kildare blitz, which was held in Kilcullen.

And they went on to represent Kildare in the Leinster FAI blitz which was held in Portlaoise.

They became provincial champions having defeated teams from Kilkenny, Offaly and Laois. It was the first time a team representing  the school has ever won a Leinster final and All-Ireland final.

This victory earned them right to take on the representatives of Connacht, Munster and Ulster in the All Ireland series.