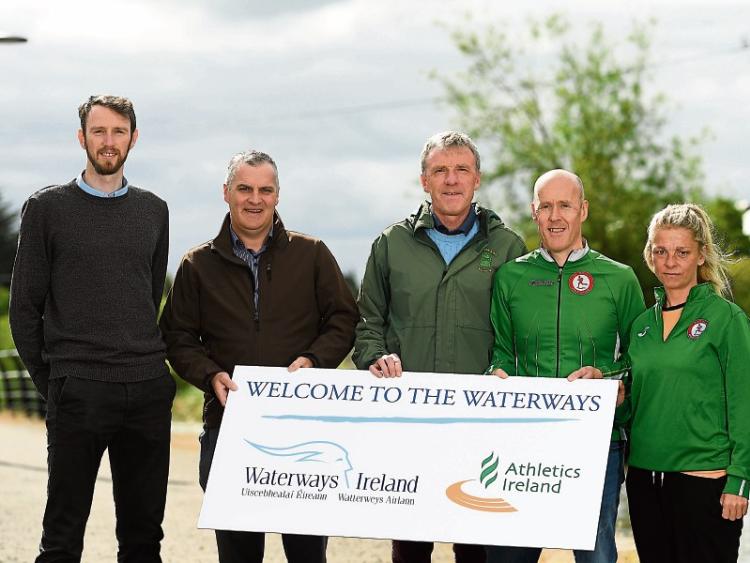 Athletics Ireland and Waterways Ireland have this morning officially reopened the extension of the Royal Canal Greenway in Kilcock which will play host to the second running of the Kilcock “10 from 10” race  on August 18, run by St Cocas Athletic club.

The two bodies are cooperating  to promote physical activity on the over 1000km of trails and facilities across the Waterways Ireland system.

Athletics Ireland said the Greenway in Kilcock has already proved hugely popular local amenity and has recently seen the introduction of Parkrun  every Saturday morning.

The Greenway will be used as the home straight for the Kilcock “10 from 10” which is hosted by local athletics club St Cocas.

This event takes place 10 weeks before the Dublin City Marathon.  All finishers can look forward to a T-shirt and medal, as well as a prize fund of over €2,500 thanks to local sponsors SuperValu Kilcock and Millerstown. Waterways Ireland will also be supporting the event with a prize for the fastest final mile while takes place along the Greenway.

The Royal Canal, originally built for freight and passenger transportation from the River Liffey in Dublin to Longford in Ireland, reopened on October 1 2010.

Waterways Ireland has now developed 23km of paddling trails around Mullingar town and 16km of walking and cycling trails from Cloondara to Longford Town.

There is a cycle hire at the Greenway activity zone in Mullingar Harbour where users can opt to travel east to McNead's Bridge for 12km or west to Coolnahay Harbour for 11km.

Waterways Ireland expects the 144km towpath from Spencer Dock in Dublin to Cloondara via Longford Town to be fully upgraded and available for walkers, cyclists, families, friends and more

Barry Pender, Recreational Events Manager for Athletics Ireland said they are delighted to continue their work with Waterways Ireland to promote physical activity on the over 1000km of trails and facilities.

Damian McWeeney, Events Manager,  Waterways Ireland, said they want to encourage people to see inland waterways as a fitness and recreational opportunity. “Through Athletics Ireland programmes such as The Daily Mile and Fit4Life, as well as recreational events such as the Kilcock “10 from 10”, we hope to further encourage people to stay fit and healthy for life,” he said.