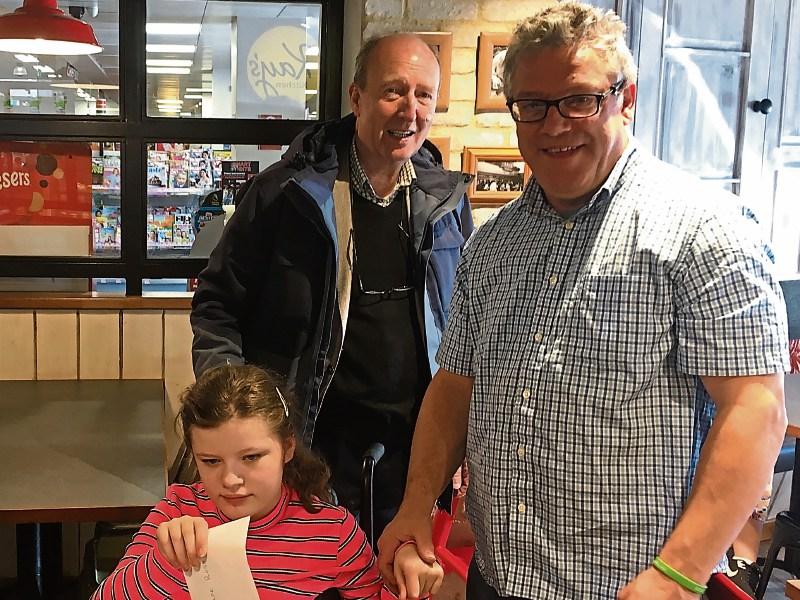 A young girl with cerebral palsy has handed a letter to Minister for Sport, Shane Ross, seeking his support to get a swimming pool for Leixlip.

Tara Larkin, 14, daughter Leixlip based independent Kildare County Councillor, Anthony Larkin, handed the letter to the Minister when he was having his breakfast in Dundrum last Saturday.

In 2011, she wrote to another minister, Minister Ring, on the issue.

Cllr Larkin said that with the letter in mind he attempted and  managed to locateMinister Shane Ross, whose department controls the large infrastructure  sport grants.

Minister Ross was in Kay’s Kitchen in Ballinteer having breakfast when approached by Tara and Anthony.

Cllr Larkin said: “To say he was surprised is an understatement.  I put to him the facts on the much maligned, debated and empty promise of the Leixlip swimming pool. I explained to him the disappointing decision of full county council not to put forward a second application for funding opting for Leixlip.

Kildare County Council has opted to make only one application, for a pool in Maynooth, in conjunction with Maynooth University.

Cllr Larkin said: “He was dismayed at that and could not understand why councillors across the county would not want more facilities for the county citing that Dun Laoghaire/Rathdown have put in five applications at this round.

Cllr Larkin said: “My daughter Tara  is cerebral palsy. Swimming is an important part of her physio. She gave him a letter she composed.  He told her he would make no commitment and will respond to her letter when he makes inquiries.”

In the letter, Tara, from  Rinawade Green, Leixlip said:

“Dear Minister, I am writing to you about my disappointment on hearing that Kildare County Council are making one application for a swimming pool at Maynooth College.  We in Leixlip have been working hard to get a pool for nearly thirty years. In 2011, I wrote to Minister Ring and he came out to Leixlip Amenities Centre.

He met me and told me there wasn’t much money available and promised me that if money became available he would give it consideration have cerebral palsy and swimming which I love is important for my strength please can you help us get a pool for Leixlip.”