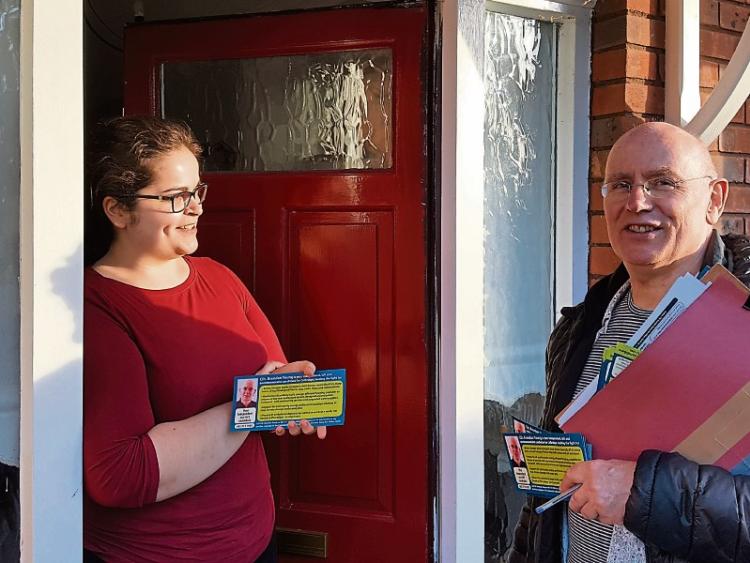 Georgia Tracey and Cllr Brendan Young on the canvass

Monday night, May 13,  was a very pleasant one weather wise and almost all the people who opened their door to Celbridge local election independent candidate were very pleasant indeed.

Despite the competitive nature of politics the candidates were very respectful of each other as well.

When Cllr Young arrived with two of his canvassing team at St Raphael’s Manor, Celbridge, another candidate, Cllr Ide Cussen, now an independent after leaving Sinn Fein, was already canvassing in the area.

Cllr Young changed direction so as not to cross her path and also not to disturb too many people too much.

The plan was to knock away from around 7pm to around 8.30pm to try and avoid bedtime for younger children, it would appear.

Cllr Young is not in the whirlwind school of canvassing, opting instead to have pretty long chats with folks.

The first was a tale of a man who did not have the look of starvation on him, but was still suffering from the 2007 recession hangover.

A house he had bought for €475,000 was now priced at around €100,000 less than that and he was still feeling the pinch, including the toll of Local Property Tax.

A woman told us she was waiting for almost half an average lifetime for a second Celbridge bridge.

A worker in the health care sector said she thought it was mad that you could struggle to get the system to pay €15 a day for home care for a very elderly woman, who otherwise might be in a hospital costing thousands.

Another woman, working in the construction industry,  who had to commute to Dublin every morning, was concerned that the transport network cannot cater for the new houses going up, and the time it takes to drive to work would be getting longer, leaving her with childcare problems earlier in the morning.

Among other things, Cllr Young urged her and others to make a submission on the next Bus Connects consultation.

For the most part, folks were pleasant and relaxed.

But at least one was angry.

The councillor was called to the door of a woman who appeared to be on the verge of being evicted by her landlord.

The councillor offered to have a look at the eviction notice for her but she had not got it, or a copy of it, having sent it to the council as part of  a housing application.

She said that the county council had offered her an apartment in a nearby town but it was too small.

The councillor knew some people he met on the door, including Georgia Tracey, who had campaigned with him in the Repeal referendum.

He also met wheelchair bound, Brian Henry, who showed him the difficulty of getting a non electric wheelchair up and down off paths when crossing roads.