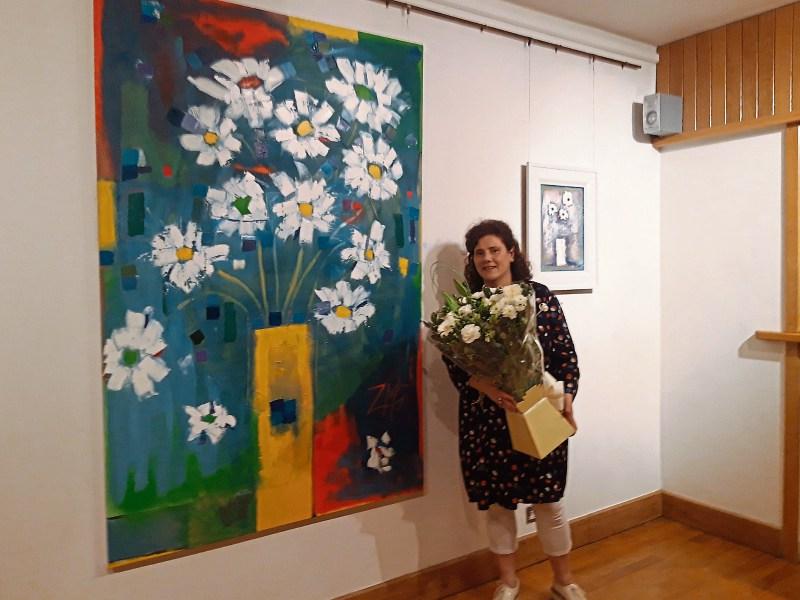 The Big Instinct is  a contemporary art exhibition of new works by self taught artist, Zita McGarry. The exhibition,  featuring her well known “Belfast Sink” floral series,  together with a selection of new style large works on canvas, will open on May 9 in the gallery at Naas Library.

A native of Longford, based in Sallins, Zita McGarry returns for her second solo show at the library venue, presenting over 20 works, of oils and mixed media, with many of the pieces memory linked to the town where she grew up.

Paintings such as The Longford Swinging Boats and Judy’s Girl Guides link back to fond times spent in the town in the 1970’s/80’s, while works such as Lake Sounds and I Am Fish Free!  are inspired by Zita’s father, Frank McGarry, a well known game angler and character of Longford. In this case, inspirational parents have a lot to answer for; as Mary and Frank McGarry brought painting, poetry and drama to their family.

Zita, is a  colourist, characterised by her use of intense colour, which dominates much of the work.  She uses a loose impasto style with much gestural marking and her work has been exhibited in galleries throughout Ireland.