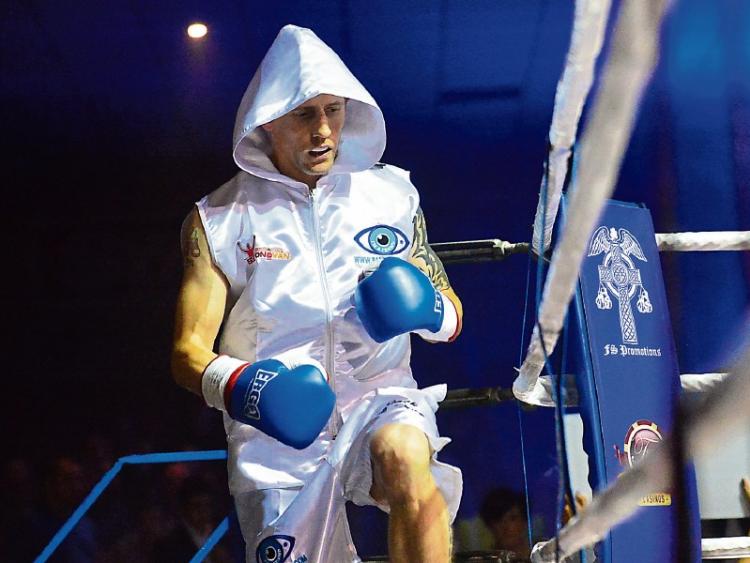 Eric Donovan steps into the ring for his first professional fight, against Damian Lawniczak at the National Stadium, Dublin in 2016. PICTURE: ADRIAN MELIA

Irish featherweight champion boxer Eric Donovan from Athy has spoken out about his battles outside of the ring.

Donovan, who started boxing at the age of seven, says he was living “two different lives” as a youngster.

“From the age of 14 or 15 I started drinking and smoking and then doing drugs, and I was living that type of life parallel to a boxer’s athletic life,” Donovan said.

“I hadn’t discovered who I was or what I was about. It was like I was living two different lives, it was very hard.

“Even when I got to the top level and the high performance level with the Irish team, I’d be up in Dublin from Tuesday to Friday and then when I’d get home Friday evening I’d go back into the same environment and same unhealthy circles, and I didn’t know how to get out of it, until the end of 2011 when I asked for help,” he said.

Donovan now travels to schools to give talks about the importance of speaking out.

“I was champion of Ireland at 11 years of age, and boxing is synonymous with courage and bravery and discipline, so if I mentioned about how I was feeling or how I was doing that’s showing weakness.

“But probably one of the greatest learning curves for me over this period of time where I’ve made a change is that I now know the real strength and the real courage is asking for help.”

Donovan wanted to share his story to help others “suffering in silence”.

“It was in 2012 when I started working on changing my life, it’s not easy to come out and speak, and even after seven years it’s still hard. I wish I had somebody come in and share with me what I go in and share with the kids.

The 34-year-old has a busy few years ahead on the boxing front as he sets his eyes on a European title.

In life away from the ring, the Athy man is due to marry partner Laura next year.