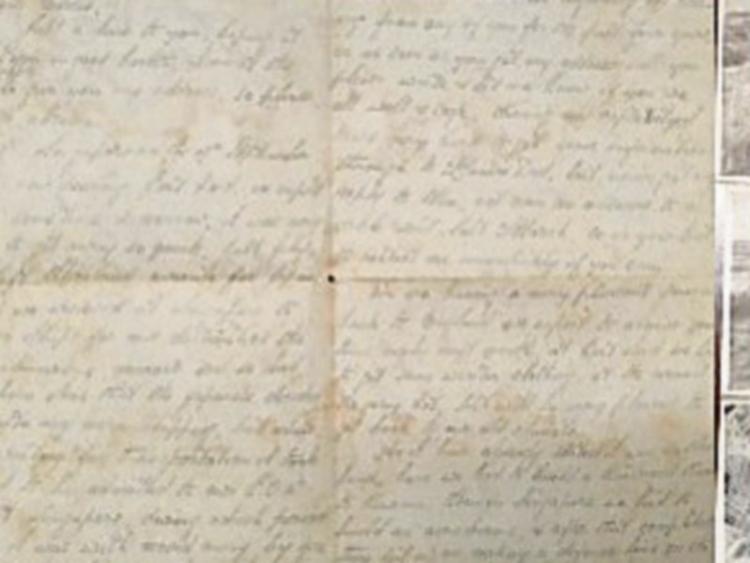 A screenshot of a historic letter

A shell found in the attic of house could be among the more unusual items to be put up for sale  at auction.

The shell, dated 1895, was removed last week for ballistic inspection by eleven gardai with help from the army bomb disposal unit.

Auctioneer Sean Eacrett discovered the live shell last week and noticing the primer and head were still intact, he called the Gardai. The shell was found in four suitcases of historical memorabilia which were originally bought over 35 years ago in a jumble sale, and they have remained in the attic of Marshalltown Cottage until last week. The entire contents of the cottage go under the hammer at Sean Eacrett Auction in Ballybrittas on Saturday April 27 at 10 am.

The shell is dated 1895 and is approx 8 inches in length. It might be returned in time to be sold at the auction DECOMMISSIONED.

Also in the cases were original type set of 'The Nation`  War issue 18, relating to the Mountjoy  Murders of Rory O’Connor, Liam Mellows, Joe McKelvey and Richard Barrett, along with a signed copy of the third and final draft of the constitution and Sinn Fein Rebellion handbook.

There is also an original 1922 typist letter detailing the murder of Erskine Childers.

Later items in the cases include a poster mocking  Fianna Fail entitled Devvy’s Circus, World War II reconnaissance photographs and a letter written by POW John Barnwell to his brother Edward while on his journey home from a prisoner of war camp in Japan.

Not forgetting an original edition of The General Evening Post dated 1781, The Currior dated from the early 1800's.

Auction also to include not 1 but 2 1985 20p coins and a letter signed by Winston Churchill.

A scene from the Naas market

No appetite for the reopening of the farmers market in Naas