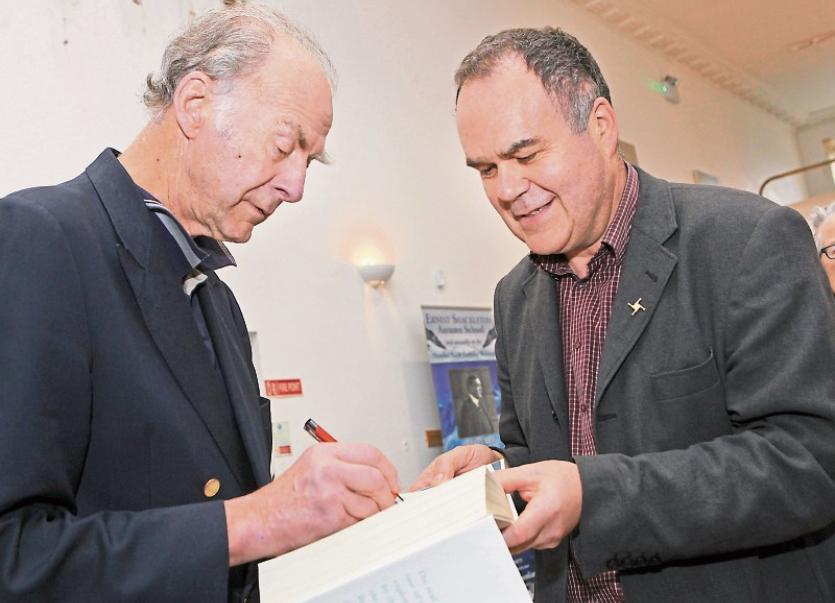 Kevin Kenny of the Shackleton Committee gets his book signed by explorer and adventurer Sir Ranulph Fiennes. at the Athy Heritage Centre-Museum Picture: Piotr Kwasnik

The world’s most famous living explorer Sir Ranulph Fiennes visited the hometown of another famed adventurer, Ernest Shackleton, when he gave the keynote address at a health and wellbeing conference last week.

The event, held at the Clanard Court Hotel, Athy, last Friday and attended by some 526 delegates, was hosted by County Kildare Chamber in association with Kildare Local Enterprise Office.

The adventurer recalled attempting to climb onto the roof of the Dáil during a family visit to Dublin as a teenager.

“I was detained by a garda and kept overnight — it wasn’t the first time I was arrested for climbing up drainpipes. I think they thought I was trying to take the copper or lead from the roof,” he said.

He recalled the incident during his keynote address to a mixture of business attendees and locals who were enthralled throughout his 60 minute talk.

Allan Shine, CEO of County Kildare Chamber said: “ This conference is one of the largest health and wellbeing gatherings of the year so far in Ireland. We were delighted with the numbers attending and working closely with our partners LEO Kildare we are able to put on events such as this with relative ease.

“Health and wellbeing is such an important topic currently. We believe that by hosting conferences such as this, we are able to hopefully inspire the people attending in some way in improving their own health and wellbeing”.

Of particular interest to Sir Ranulph Fiennes was his visit straight after the event to Athy Heritage Centre Museum as he is in the midst of writing a book on Ernest Shackleton.

Sir Ranulph said that “Shackleton was one of the world’s finest explorers and whilst there are more than 60 books written on Shackleton, I believe that my own experiences of extremes gives me a unique perspective on the adventurer from Kilkea.”