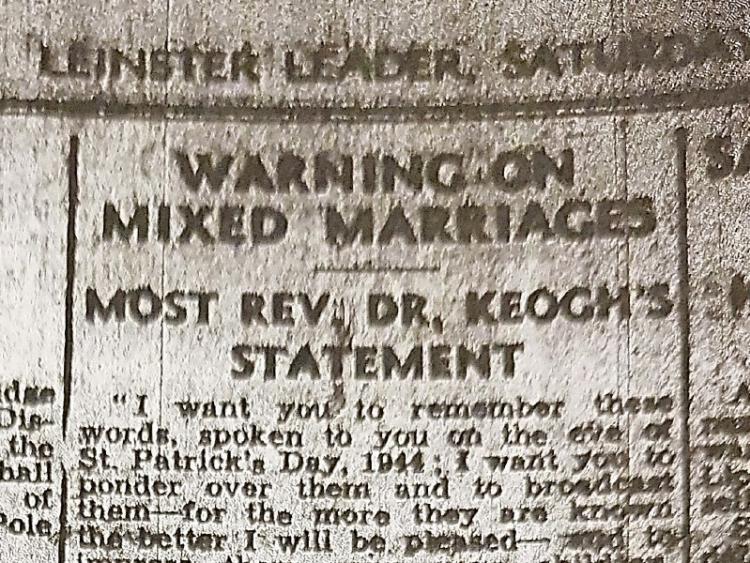 The article from March 1944

Theresa Murray takes a look back through the Leinster Leader archive from March 25, 1944

“I want you to remember these words spoken to you on the eve of St Patrick’s Day, 1944. I want you to ponder over them and to broadcast them — for the more they are known the better I will be pleased — and to impress them upon your children, especially if they are keeping company with non-Catholics.

“My words are these — no dispensation will be granted for a mixed marriage in this Diocese in future.”

The above was spoken by His Lordship Most Rev Dr Keogh, when, in the presence of a crowded congregation of parents, he administered the Sacrament of Confirmation to over 100 children in the St. Philip Neri Church, Daingean, the Leinster Leader reported on March 25, 1944.

Stating that there was one very exceptional case apart, a case which as a priest for 34 years and as Bishop for seven years, he had never had to deal with, his Lordship warned people against coming to him “with tears and supplication” for a dispensation which his conscience would not allow him to give.

“Nor is there any use in trying to bring influence to bear on me; that has been done too, and a very high influence I may say, but though I have as many faults as anybody, one of them is not being susceptible to influence,” said His Lordship.