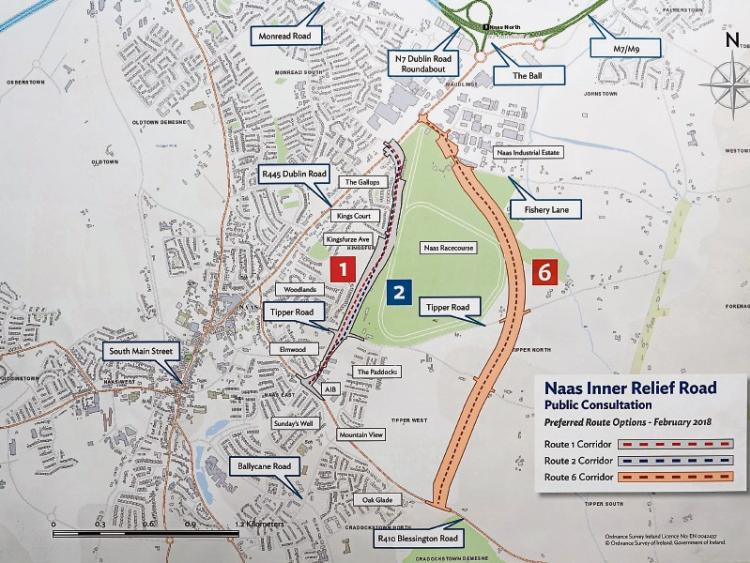 The route chosen is 2, marked in blue

A decision on whether to accept the recommended route of the Naas inner relief route may be pushed out for a month.

The nine councillors representing the Naas area (Naas Municipal District) were due to vote on the route - which will take traffic off Dublin Road at the existing racecourse junction and end at Blessington Road (near the AIB centre) - on April 16.

But at a NMD meeting yesterday Kildare County Council official Peter Minnock said if the councillors feel they needed a further four weeks beyond the April date “the space and time is there”.

Mr Minnock said a new council would not be as familiar with the issue as the current councillors.

He was responding to criticism by Cllr Darren Scully who said the issue is “one of the most important decisions to be made for the town especially for residents of the north eastern part of Naas.”

Cllr Scully described the timeline surrounding the planning process for the road as a “rush job.”

And he suggested that Kildare County Council believes it would rather deal with the sitting councillors than a newly elected group, following the election.

He claimed that the time allocated to the planning procedure, known as a Part 8 process, as the “bare minimum”, adding it does not provide much time for submissions from those with a view on the project.

The issue has sparked controversy with residents living close to the route objecting strongly while KCC says it will alleviate traffic congestion.

The closing date for submissions is April 10.