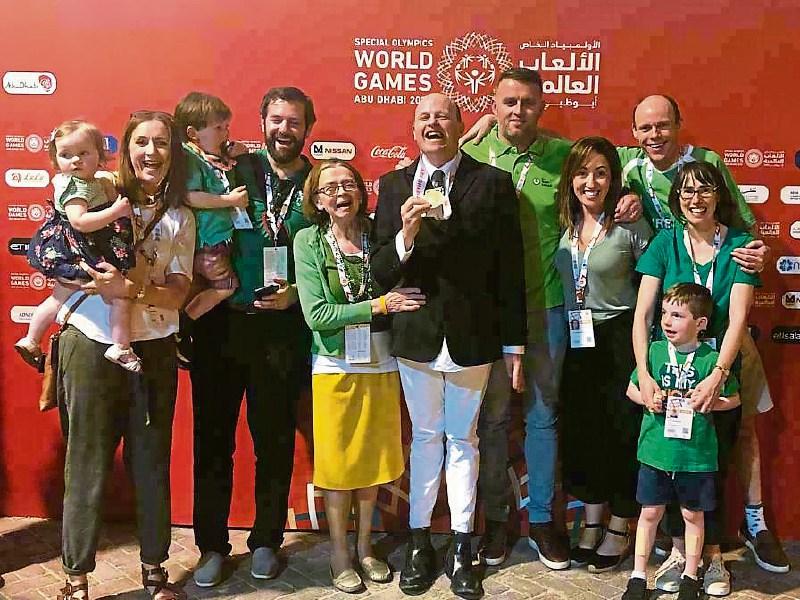 Conor Byrne celebrates with his family in Abu Dhabi

The 37 year old, who lives in Gleann na Riogh with parents Fran and Frank, took the supreme accolade in an English working trials event at the weekend and followed it up with a silver. A dozen participants from across the world took part in both disciplines.

Conor was cheered to success in the United Arab Emirates capital by his mother Fran as well as brothers Christopher and  Ronan, sister Susan, brother in law Conor, sisters in law Karen and Sinead, nephews Davin and Quinn and niece Faye.

Although he participated in athletics previously, Conor’s love of horses and all things equine dictated that equestrian sport was likely to be his forte.

“He just loves horses and always has from the  time he started to go to Osberstown (the back road to Punchestown racecourse) to see the horses and feed them carrots. He got involved in the sport about ten years ago and his interest is such that we call him ’the horse whisperer’. He’s very enthusiastic about the sport and he has been training at the KARE equestrian centre in Baltinglass” said sister Ruth.

Conor is well known in Naas, especially in Monread where he is a very popular figure and his success looks likely to be marked by a special function at the Monread bar and lounge and at more a formal event in Aras Chill Dara.