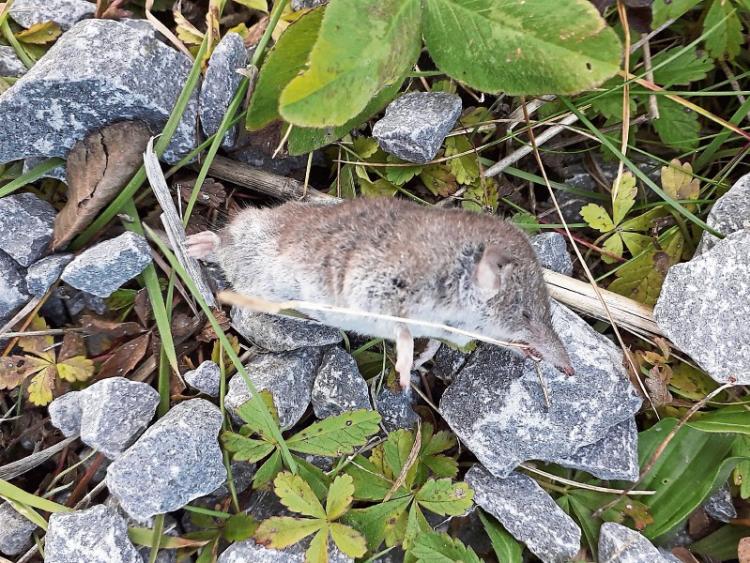 A new mammal has been found in County Kildare - but it’s not necessarily good news.

The greater white toothed shrew was first discovered in regurgitated barn owl and kestrel pellets on the Tipperary/Limerick border in 2007.

They have spread quite rapidly since then and there has been a live sighting in Naas at the Newhall retail park.

The National Biodiversity Data Centre documents Irish wildlife and confirmed that one was found and photographed by locally based wildlife protection group Wild Kildare at Kildoon Wood, Nurney  on October 29 last. Since then there has a few more sightings in various habitats in the county, including dead ones found at Ballyteague (canal bank track), Duneany, Kildare town (farmland) and Lullymore (cutover bog).

It is thought that they came into Ireland in either root balled trees from continental Europe or in fodder from France.

They’re known to live in areas from western Europe down to north Africa and they are about the size of a mouse.

But the shrew is one of  the 10 most invasive species in Ireland according to the National Biodiversity Data Centre for a few reasons.

They have the potential to reproduce and spread rapidly. Where it encounters Ireland’s smallest mammal, the native pygmy shrew it out competes it for food such as large Insects, because it is roughly twice its size. This leads to the new shrew colonising an area and the little pygmy becoming extinct locally. This also has repercussions for the ecosystem likely to alter the ecological balance in the colonised area. They are also thought to be nutritionally poor for species further up in the food chain such as barn owls. Although they superficially look like mice they are not related, shrews have a long snout. The species also has the potential to infest a house.

If you encounter one it is very important to record it. Please send your records of it and Pygmy Shrews to Wild Kildare by email at wildkildare@gmail.com or phone 0876872939 or to the National Biodiversity Data Centre at https//records.biodiversityireland.ie

Please give the Date, Location and if possible a picture. The greater white toothed shrew has pure white teeth while the pygmy shrew has red tips to its teeth and is much smaller.