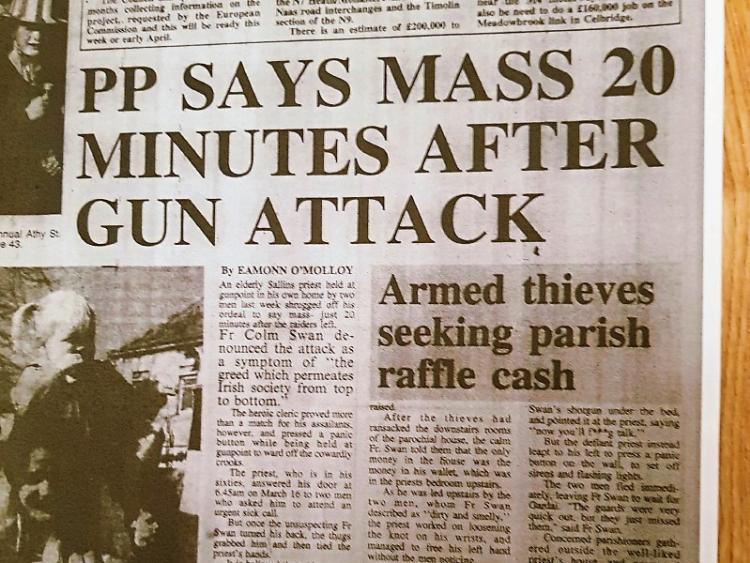 The article that appeared in the paper

Theresa Murray looks back at times gone by in the Leinster Leader archive. Here is a story from 20 years ago

An elderly Sallins priest held at gunpoint in his own home by two men last week shrugged off his ordeal to say Mass — just 20 minutes after the raiders left, the Leinster Leader reported on March 25, 1999.

Fr Colm Swan denounced the attack as a symptom of “the greed which permeates Irish society from top to bottom”.

The heroic cleric proved more than a match for his assailants, however, and pressed a panic button while being held at gunpoint to ward off the cowardly crooks.

The priest, who is in his sixties, answered his door at 6.45am on March 16 to two men who asked him to attend an urgent sick call.

But once the unsuspecting Fr Swan turned his back, the thugs grabbed him and then tied the priest’s hands. It is believed the raiders were after the proceeds of a parish raffle, as it was known in the area that over £30,000 had been raised.

After the thieves had ransacked the downstairs rooms of the parochial house, the calm Fr Swan told them that the only money in the house was the money in his wallet, which was in the priest’s bedroom upstairs.

Dirty and smelly
As he was led upstairs by the two men, whom Fr Swan described as “dirty and smelly”, the priest worked on loosening the knot on his wrists, and managed to free his left hand without the men noticing.

Once upstairs, the burglars took around £70 as well as Fr Swan’s watch and mobile phone, Then one of them spotted Fr Swan’s shotgun under the bed, and pointed it at the priest, saying “now you’ll f***ing talk.”

But the defiant priest instead leapt to his left to press a panic button on the wall, to set off sirens and flashing lights.
The two men fled immediately, leaving Fr Swan to wait for Gardai.

“The guards were very quick out, but they just missed them,” said Fr. Swan.

Concerned parishioners gathered outside the well-liked priest’s house and presented him with a brand new watch when they heard his had been stolen. “It was a lovely gesture,” said Fr Swan.

The raiders left at about 7.10am, but after talking to Gardai, Fr Swan proceeded to Sallins Church to say 7.30 mass.

He emerged unscathed apart form a slight cut from a knife one of the raiders was carrying.

Gardai are investigating the incident.

Both men are described as being dirty and smelly. The first is around 50 and wore a zip-up windcheater and dirty cap. The second was between 35 and 40 and wore jeans and a cap.