FROM THE ARCHIVES: Kildare gets set for historic 1918 election 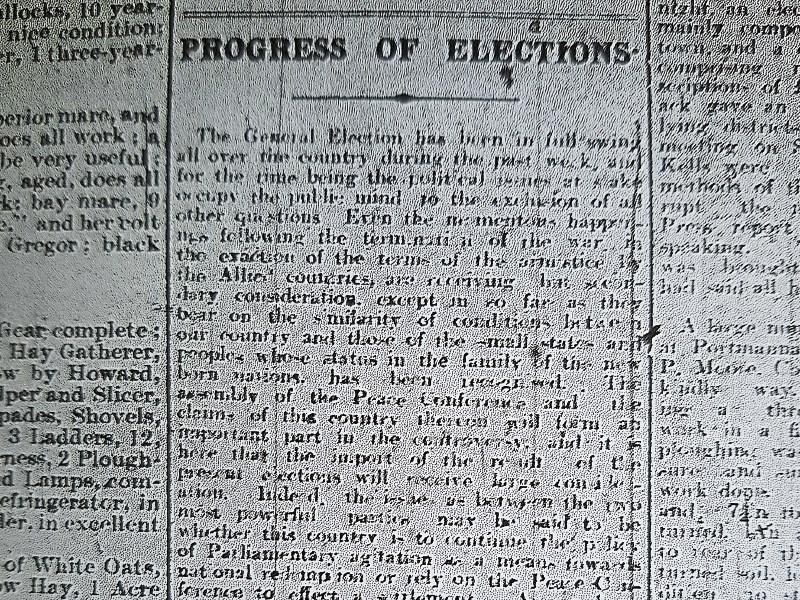 This Friday, December 14, marks the 100th anniversary of the historic 1918 general election.

This was the first election held after the post-war Representation of the People Act.

The two chief topics of conversation 100 years ago, the war and the flu epidemic, were thankfully ending, and by December 1918, the Leinster Leader had turned its full attention to the General Election.

The December 1918 election was also the first general election which allowed women (over the age of 30) to vote, and also gave the vote to all men over 21, including working class men who had previously been excluded from voting.

The Leader reported in the run-up to polling day that the General Election has been in full swing all over the country during the past week, and for the time being the political issues at stake occupy the public mind to the exclusion of all other questions.

“Even the momentous happenings following the termination of the war in the exaction of the terms of the armistice by the Allied countries are receiving but secondary consideration except in so far as they bear on the similarity of conditions between our country and those of the small states and peoples whose status in the family of the new born nations has been realigned.

“Indeed the issue between the two most powerful parties may be said to be whether this country is to continue the policy of Parliamentary agitation as a means towards national redemption, or rely on the peace conferences to effect a settlement.

“There seems to be but a very narrow line of division between the advocates and supporters of these two courses in as much as that Mr Dillon the leader of the Irish Party has decided following the latest debate in the House of Commons on the Irish Question, to appeal to the President of the United States to intervene for a settlement.

“The two most powerful parties in the election are therefore as one in the propriety of appealing to an external tribunal. Both have been met by the Coalition Government with a denial of the right of any external authority to interfere in what they regard as a purely domestic question. But any hope entertained of a union of both Irish political parties to fight out the question of Ireland’s future with any British parliament that may be returned to office are now at an end, and on the electorate is placed the responsibility of answering whether the British Parliament or  the international Peace Conference is to be appealed to.

“Should the former achieve the majority, the demand for Home Rule will be renewed in the British parliament while the Peace Conference advocates proclaim that nothing short of complete and sovereign independence will meet their claims. It is of course early yet to speculate on the result or which side will secure a majority.”