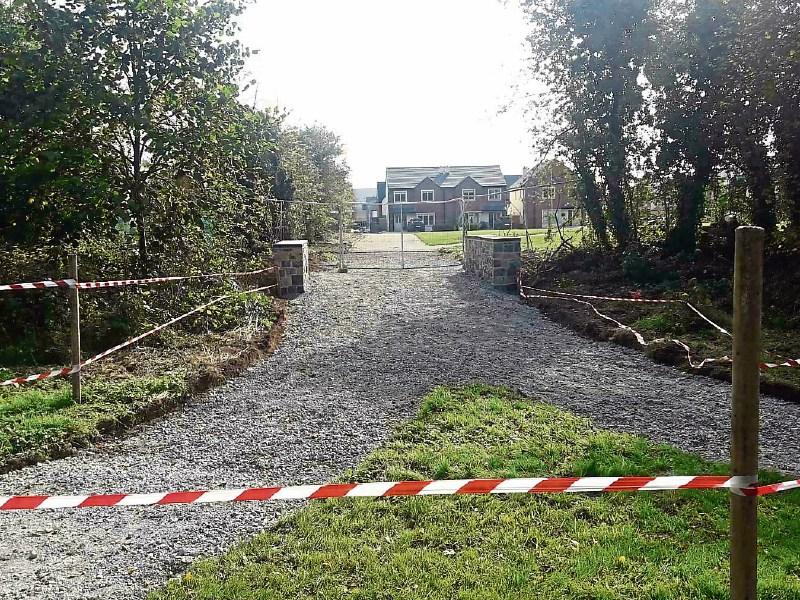 But officials insist they have done nothing wrong in giving permission.

The developer of the estate has created a cycle/pedestrian route onto Carton Avenue.

At their Municipal District meeting this morning, councillors unanimously agreed four motions condemning the work and asking that it be undone.

But officials said they have no authority to do that under the law.

Cllr John McGinley said it was an “appalling eyesore and two planning officials did not have the authority to make the decision without reference to councillors.

He said the Council should pay for the restoration.

Director of Services, Peter Minnock, disagreed, saying the work was allowed for under the Local Area Plan and officials had acted correctly.

Mr Minnock said he would ask the developer to complete the laneway, which cost under €127,000 and it did not require public consultation.

He said it was done “substantially in accordance with planning permission”.

Cllr McGinley said he would back people going to Court over the issue.

He said permission allowed for an access point but not one so wide.

“There will be 400 houses in the development,” he said and council officials wanted to see Carton Avenue used.

Mr Deane said not everyone was against the work.

“This is not a fiendish plan to destroy the amenity. We believe it will be very popular,” he said.

Cllr Naoise O'Cearuil said there was “anger and upset” and asked officials to reconsider. He said this would “go down the legal route.”

He said the developer did not own Carton Avenue. Any access was granted only up to the border of the Avenue.

Cllr Tim Durkan said it was technically an unauthorised development.

He asked what proposals officials had to remove the entrance, or minimize it.

He said neither he nor the public had seen any drawings of the work plan. He said he had emailed the planning section and had yet to get a reply.

Mr Minnock said the work was not an unauthorised development.

He said that some would see this as an improvement, opening up the historic area for people. Others, closer to it, could see it as a degradation.

He said the work was allowed for in the Local Area Plan and the County Development Plan. He pointed out that if officials had to go back to the councillors and public for everything there would be no progress.

Mr Minnock said councillors had agreed the Local Area Plan but he suggested they “didn’t really didn’t mean it.”

Cllr McGinley said this was “very very untrue” and asked him to withdraw his remark.

Cllr Teresa Murray said there was “a sense of shock and the whole community was outraged.” She was concerned that bikes would be using it.

Cllr Reada Cronin said she was “horrified” to see the work last Monday. She said she had spent a lot of time in the Council building since then but could not locate the council official.

“What in the name of God was the man thinking when he was talking to the builders. The councillors did not know anything,” she said.

“The idea of people coming from McDonalds and Tesco with trolleys of beer and giving parties (at the Avenue) has frightened the life out of them.

“We will fight this on the Avenue as well as in the courts. I will man the barricades. This won’t happen. Kildare County Council had no right to enable entry this way. It should say sorry and restore the area to its original state,” she said.

Cllr Brendan Weld asked why the the gap was so wide?

He said he was surprised the area was not designated a Special Area of Conservation.

Mr Minnock  dismissed a suggestion that cars and motorcycles could use it as there would be bollards.

Director of Services, Sonya Kavanagh, said the Council could not act if the motions were approved.

Cllr McGinley asked for the two walkways to be removed.

Cllr Durkan’s motion called for the Avenue to be restored, as did Cllr O'Cearuill, and Cllr Murray called for an investigation to ensure all planning conditions are adhered to.

A statement issued by the Council after the meeting said the creation of a footpath/cycle path was shown on the plans submitted as part of the planning application and provided for under condition number 6 of the permission.

“Following recent complaints regarding the development of the path, the site was inspected by the Planning Control Section. This inspection indicated that the works thus far have been carried out substantially in accordance with the planning permission granted and the approved compliance details,” it said.

“As all works have not been completed to date, the Council will continue to monitor progress to ensure compliance with the requirements of the planning permission and the approved compliance details.”