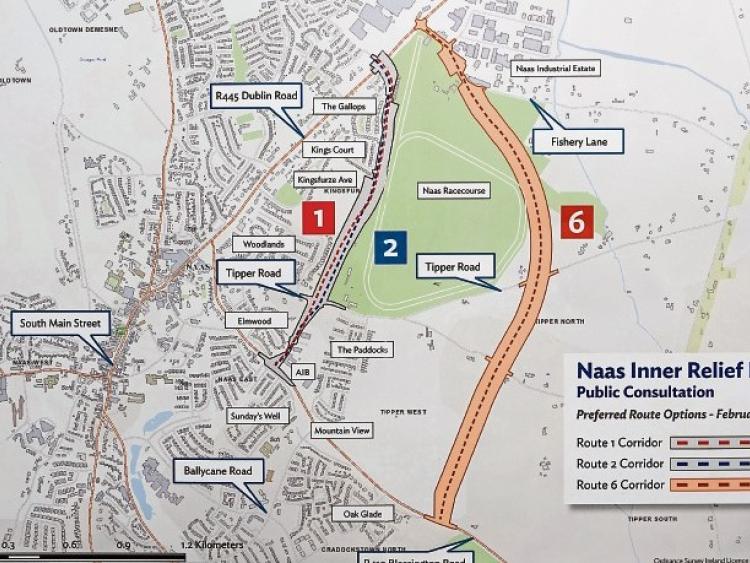 The route chosen for the controversial Naas inner relief road will not be available this month.

It had been hoped that the selected route would be decided and put before the next meeting of the Naas Municipal District.

Read also: Kildare groups call for cycling to get 10% of transport budget

However according to Kildare County Council the work has not yet been completed.

“The Route Selection Report has not been finalised and it is expected to take another couple of months,” KCC told the Leader last week.

Two of these are similar and start at near the entrance to Naas Racecourse and exit at Blessington road.

A third route, known as 6, would start further up the Dublin Road and take a wider berth around the Tipper side of Naas racecourse, before exiting at a point closer to the Oak Glade residential area on the Blessington Road.

The meeting organisers say they represent about 900 homes and they complained about a lack of information about how the routes put forward were chosen.

A number of residents, mainly people living close to Naas racecourse, just off Dublin road, have objected to routes 1 and 2.

The say the routes are more suited to a town with a smaller population. They staged a public meeting at the Osprey Hotel over four months ago attended any councillors and constituency TDs, who expressed their opposition of the routes 1 and 2. Cllr Darren Scully said at that meeting that if the councillors voted against the route put forward then that would put an end to the entire proposal.

There is also some opposition to route 6 but this is less organised because less people are affected and it is considerably less populated and that routes closer to the Dublin road.