20th anniversary of her dissapearance 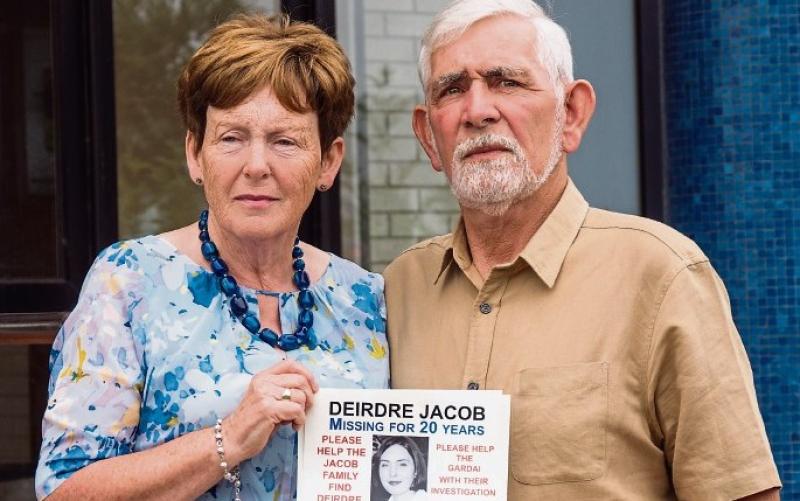 Deirdre Jacob's parents, Bernie and Michael at the press conference on July 27

Newbridge garda station received six calls last week in connection with missing woman Deirdre Jacob, following an appeal made on the 20th anniversary of her disappearance.

Her parents, Michael and Bernie made a renewal appeal for information about their daughter Deirdre, who was 18 at the time she disappeared outside the family home in Roseberry on July 28, 1998.

SEE ALSO: Kildare weather forecast for the week ahead

Family liasion officer for the Jacobs, and former Sergeant of Newbridge Garda Station Seamus Rothwell said in total they have received 10 calls, with four more coming in via the Garda Confidential Line.

“We had at least half a dozen into Newbridge and four on the confidential line,” he said.

“We’re checking out all of the information received. We appreciate all the information we get. Last Monday we had six calls into Newbridge. It may not seem a lot, but all it takes is the one good call to make a difference.”

Insp Rothwell, who is now serving in Wicklow, said that the appeal for information is ongoing.

“I would say to people that we are still looking for information and you never know. At least six people took the trouble and time of day to call in to Newbridge Garda Station.

“That is better than none and we will check out everything we got. Sometimes it might seem like a small insight but it might be of benefit to the investigation as a whole and it could be the missing link we are after to determine what happened to Deirdre.”

Her parents Michael and Bernie made a heartfelt appeal outside Naas Garda Station on Friday, July 27, last asking for anyone with “any nuggets” of infor mation to come forward.

“We’re pretty confident that there are some people or at least one person who has information that has held on to it for a long long time,” said Michael.

“Now would be a good time to clear their mind and tell — and there are many ways in which they can do that. They came come directly to the gardai and they will find that the gardai will be very sympathetic.”