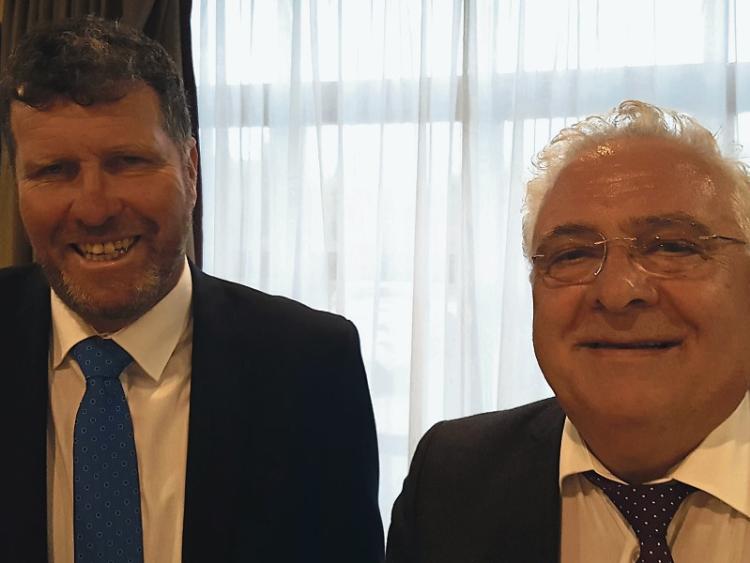 The Fine Gael party in Kildare North has nominated two candidates, current TD, Bernard Durkan and former TD and senator, Anthony Lawlor, to run for the party in the next general election.

The convention heard that Deputy Durkan had paid for homeless people to stay temporarily in local hotels.

At the selection convention held at the Westgrove Hotel in Clane last night (July 17), the members were told that Fine Gael’s national executive said that two candidates should stand in Kildare North.

SEE ALSO: Would be thief gets a nasty surprise in Naas

There were only two nominations for the positions which led Constituency chairman, Stephen Walsh to note that they were “hoping for a bit of blood sports” in a contest.

Deputy Durkan’s proposer, Cllr Brendan Weld told delegates that Deputy Durkan “has often paid to put people up in this hotel and the Glenroyal” until they were sorted out with accommodation.

In proposing Senator Lawlor, Stephen Walsh said that his absence has been felt in Naas. Mr Walsh said the Fianna Fail deputy in the area had “done nothing to address some issues in the area notwithstanding continued promises.”

In his address, Deputy Durkan said they lived “in a time when populism rules and that becomes a danger.”

He said Fine Gael had eventually steadied the shop following the financial crash.

But he also warned that if another crash comes, “it will be worse because we won’t be able to find the resources from our friends in Europe.”

Senator Lawlor said his defeat in 2016 was difficult for him but he had learned “home truths” that night.

He said that when campaigning and doing constituency work, “he spent more time in the butchers’s shop in Derrinturn than Naas” allowing Fianna Fail take the seat.

“I’m getting back to roots and back to where I want to go, Dail Eireann.”

Addressing the meeting, Kildare South TD, Martin Heydon, said he hoped the confidence and supply agreement with Fianna Fail will continue for two years but they had to be prepared for its failure at “a whim” and an election.

He said that by the end of this summer, Fine Gael would have only three selections conventions left to be held around the country and a few candidates to be added.

Deputy Heydon said while the media would box it off and won’t want to talk about it unemployment has fallen 15% in 2012 to below 6% now.

He said the ”challenges now are “all solvable.”

He said that any increases in spending by Government must be done in a sustainable way.

On the question of cabinet representation for Kildare, Deputy Heydon said. “We are too big a county not to have a minister.”