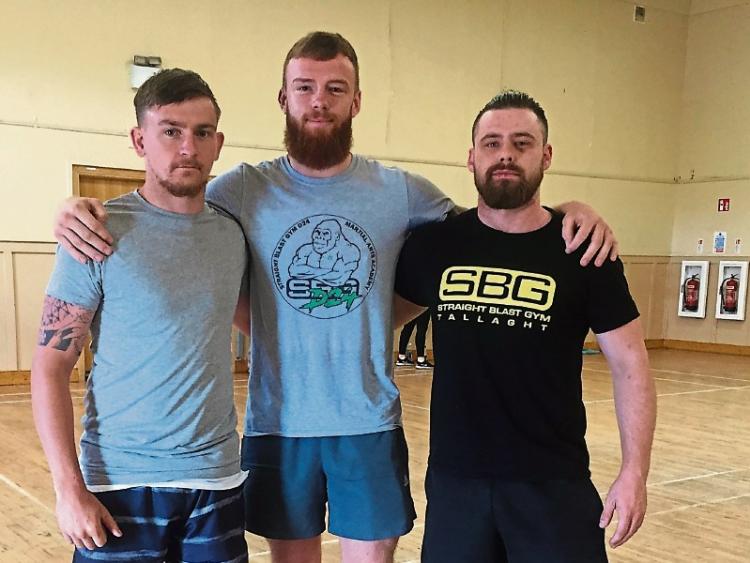 Coaches Joe Jordan, Nate Enright and Rob O'Connor at the class in Clane

“Anyone can attack you on any given day for any reason and everyone should know simple techniques to escape and keep themselves safe.”

These are the words of MMA Practitioner, Rob O’Connor, speaking at a free self-defence class set up specifically for women.

Close to 40 women took part in the first class in Clane on Saturday, July 7 last.

The idea to set up the classes stemmed from an alleged sexual assault that shocked the community of Clane on June 12, 2018.

The investigation is ongoing into the incident that is alleged to have occurred in the Millicent Road area in the early hours of the morning.

Rob, Muay Thai coach Nate Enright, and MMA fighter, Joe Jordan received a huge response after reaching out to women in the community.

Rob said; “it’s becoming increasingly important for people to be able to protect themselves.

“It’s not even men that women need to protect themselves from, it’s other women too. I don’t know whether it’s because of the internet that we’re seeing it more, but I think self-defence is for everybody, not just men,” said Rob.

The lads thought basic skills during the first class.

These included how to defend yourself from someone coming at you from in front, and from behind.

Claire Flynn from Clane was prompted to attend the class when she heard of the alleged incident in the town.

“I thought it would be good to be able to defend myself, or at least learn some skills if something did happen,” she said.

“Certainly there is a fear there anyway, but it’s a mental thing to be able to know that you can do it.”

Friends Noelle and Emma thought the classes would be beneficial.

“I suppose to have more confidence if we ever got into the situation, hopefully we won’t, but that if we did have to defend ourselves that we know how to do it”, said Noelle.

“There aren’t actually many self-defence classes around, most are just fitness but this is something that could potentially save our lives or get us out of a tricky situation so I think it’s really valuable,” added Claire.

The lads are hoping to continue the classes every Saturday morning at 1oam for a number of weeks.