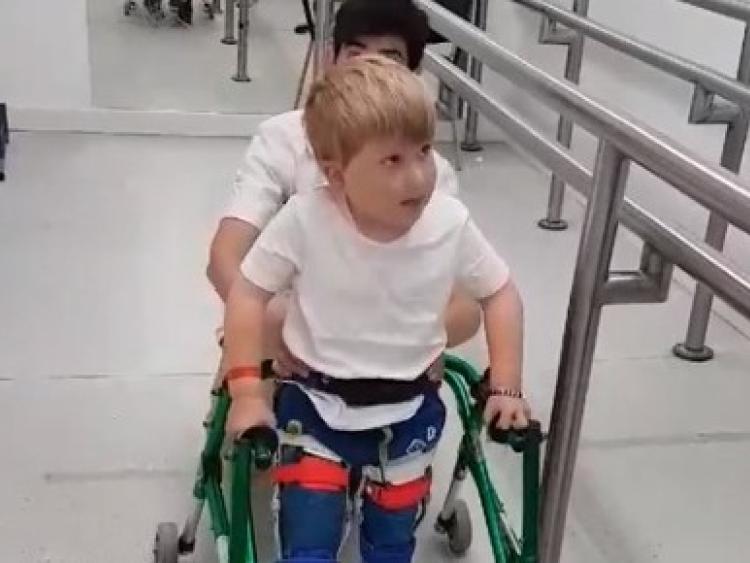 This is the moment little five year-old Eddie Brett from Monasterevin took his first steps as his emotional mum, Lisa looked on.

Eddie was born with Spina Bifida and Lisa was told by doctors after his birth that he would never walk. Not one to shy away from a challenge, she and her family have pursued every avenue to help the Scoil Eibhin Naofa junior infants pupil achieve his full potential.

Last Tuesday June 19 was a momentous day for them.

As Eddie took his first steps with his walker and his Hkafo's (leg supports) at the Ottoboch clinic at Cappagh Hospital in Dublin, the Kildare youngster beamed.

"We are just so proud of him.  His orthotist, Donna Fisher has been amazing," said Lisa.

She explained how Eddie had undergone tendon surgery on his feet with surgeon Conor Greene in January 2017. She told how Eddie had tried the walker and the Hkafos before but was a bit too young.

She said he hadn't built up enough strength at that time and was a bit nervous. Since then he has been continuing his physiotherapy sessions with First Steps in Limerick.

Lisa outlined the next step in Eddie's journey. Each day he will spend some time standing in the supports with the frame to get used to it.

"The aim is to get him ready so he can use it when he goes back to school in September. The school have been brilliant. He has a special needs assistant, Claire Newman and she has been just brilliant, so that's the goal," she added.

SEE ALSO: KILDARE PROPERTY WATCH: The Thatch in Ballymore is for sale

Not content with strutting his stuff at Cappagh Hospital last Tuesday, on his way home Eddie walked into the Naas Hospital ward where his granddad is being looked after, to show him what he could do. His dad and other grandparents also got to see him in action.

"He is rearing to go. It is just unbelievable," said Lisa.

For more information on Eddie and his incredible journey, check out Eddie's Engine on facebook.