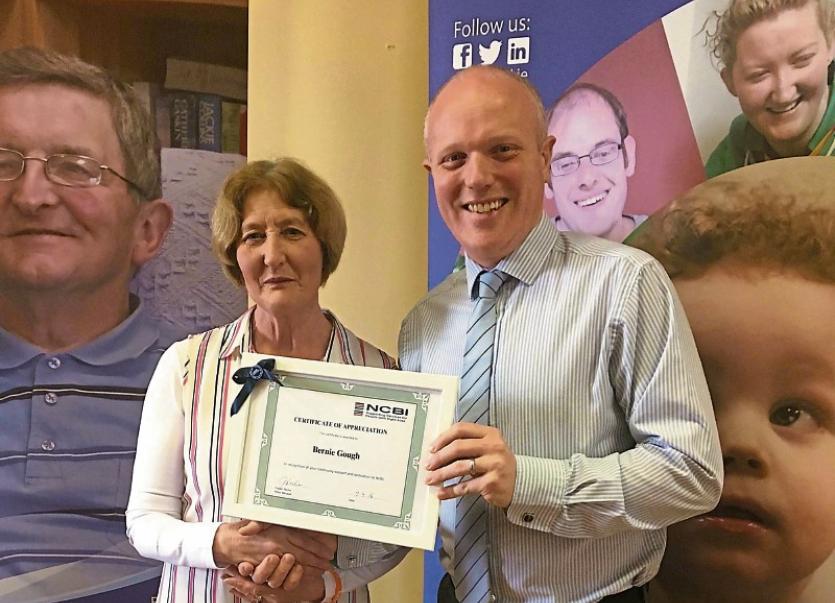 Bernie Gough getting award in April

The National Council for the Blind in Ireland is looking for more volunteers in the Maynooth area.

Sally McEllistrim, spokesperson for NCBI, said: “We need volunteers for our  shop in Maynooth and north Kildare as a whole really. If people want to give some time please contact Pauleen.byrne@ncbi.ie, she said.

NCBI, whose CEO, Chris White, lives in Leixlip, is dependent on volunteers.  “We simply couldn’t open the doors without our network of 660 volunteers who are worth €2.5 million to the NCBI,” she said.

Ms Ellistrim said that a new research project from NUI Galway shows how important volunteering is to the fabric of a community, especially rural ones, and running a huge organisation with 260 staff.

In April, two volunteers who work at the NCBI shop in Celbridge, were presented with achievement certificates at a lunch in the charity HQ.

Kitty Kiernan from Maynooth and Bernie Gough from Celbridge have been volunteering with the National Council for the Blind of Ireland, (NCBI)  which works  for people with sight loss, for the past seven years.

NCBI said there are 2,112 people with sight loss in county Kildare. The organisation has eight shops in the county.

Kitty and Bernie both said that working for the NCBI is “a pleasure and a joy and we get back so much more than we give”.