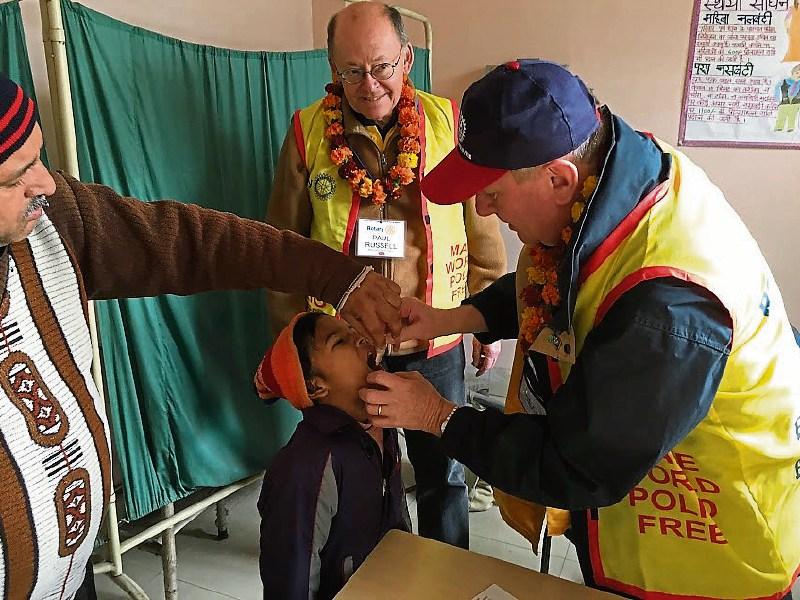 Newbridge man, Sean Dunne has proven he is a person of action when he recently embarked on the trip of a lifetime working on the front line eradicating Polio in India.

Sean traveled to India with Rotarians from across Ireland and the UK in a bid to immunise millions of children as part of Rotary’s Polio Plus campaign.

Rotary are an integral part of a worldwide team known as the Global Polio Eradication Initiative which they spearhead along with World Health Organisation, UNICEF  and national governments. The initiative is dedicated to eradicating Polio from the earth.

Sean’s trip to India, which he committed to once he had retired, was not only because he wanted to see the country, but as International Chairperson for Rotary Ireland, Sean wanted to see first-hand how the effects of this disease are still affecting people today and he wanted to play his part in helping Rotary to eradicate the disease forever.

“Polio is a terrible disease, but one that can be eradicated with a simple and harmless vaccine. It may seem that Polio is something of the past but until it is eradicated world-wide it is still a danger to every human,” he said.

“Rotary and the Bill and Melinda Gates Foundation have been working together raising funds and although we are close to saying good bye to this awful disease forever, we must not take our eyes off the goal – if the immunisation programme was to stop or slow down this disease would again ravage thousands of people across the world in a very short space of time. Let us not forget, that even today, Polio is only ever a plane ride away from any of us.”

Sean, a member of the Rotary Club of Newbridge is very active in his role of International Chairperson as he works to help those in need internationally, encouraging Irish Rotarians to support international projects as well as those they support closer to home.

“The world we live in is becoming smaller and as Rotarians we believe it is our responsibility to help people regardless of borders. To provide help within our own communities is vitally important but to reach out further and join forces with Rotarians across the world means we can achieve so much more. When we reach our goal of eradicating Polio which I am confident we can achieve, Polio will be only the second disease to ever have been fully eradicated. That’s something I want to be a part of and something I can be proud of,” he explains.

“This trip was truly humbling, I met many beautiful people, both fellow Rotarians and their partners or their children, along with local people who despite the language barrier made us feel welcome and were clearly delighted that their children were getting the vaccine against this disease. When we first started the number of cases was in the high hundreds of paralysed children every year but since India was declared Polio Free, the emphasis has been on Keeping India Polio Free. “Sean goes onto explain the importance of continuing with the campaign to educate and donate in the fight against Polio.”

He said that even if the last case of polio is identified this year, a huge amount of work will remain to ensure that it stays gone.

“Vaccinations will continue and need to be funded. We are so close. We’ve got a 99.9 percent reduction in polio. But we’re not there yet,” added Sean.

“Rotarians and others have to keep working. People will naturally say, ‘Well, it seems to be basically gone so let’s move on to other things,’ but the fact is it isn’t gone, and if we move on and don’t complete the job, we set ourselves up for having the disease come right back.”

Alongside continuing with the worldwide eradication of Polio, one of Rotary’s main goals for 2018 is to increase membership, to date there are 2000 Irish Rotarians doing wonderful things for their local and international communities, The People of Action campaign aims to highlight the amazing things they do and encourage more people to join their local club.

To find out more about becoming a person of action please visit www.rotary.ie

To help Rotary Ireland Eradicate Polio once and for all please visit www.endpolionow.org