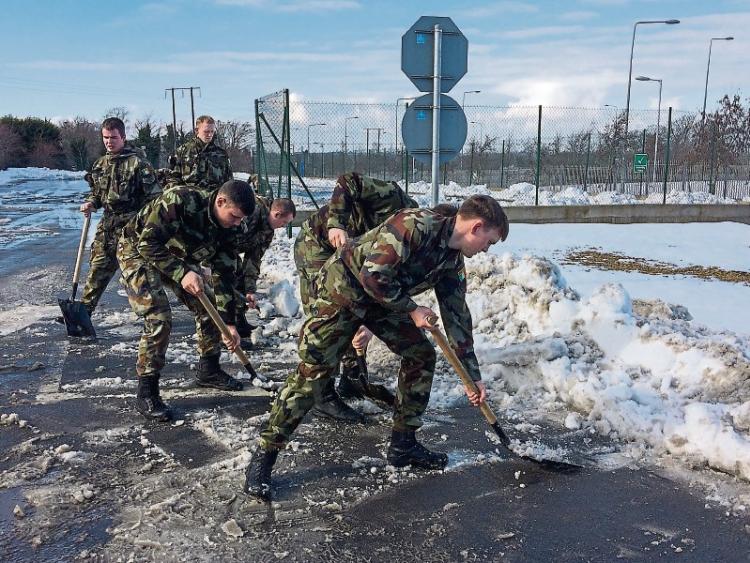 Soldiers work to clear snow at Scoil Bhride in Kill

Kildare County Council expects to find a considerable amount of damage to the road network in the wake of the weather crisis.

A survey of the road network will now be undertaken to assess the impact of snow and ice and this will take at least six weeks.

It entails driving along each road.

“Because of this incident, we have lost two weeks of our planned roads maintenance programme anyway and I believe that substantial additional damage has been done and it’s likely that local (minor) roads will have suffered the greatest damage,” KCC’s Niall Morrissey Director of Services for Roads and Transport said.

There are 2,500 kilometres of roadway throughout the county and most of these (1980 kms or 1175 miles) are local routes.

Because regional roads are maintained more regularly, the impact on these won’t have been as severe.

And while the council says it responded satisfactorily to the conditions, its reaction will also be reviewed to identify if any improvements can be made.

As reported in the Leader the bill for dealing with the immediate impact of the weather will come in at €1m.

The council will also examine the machinery it has at its disposal.

The council itself also closed for two days and this will mean some administration delays.

“Apart from the machinery, we will review the versatility and flexibility of our personnel, how we would deal with critical issues like a homelessness crisis or if say a major planning decision was due to be given at a crisis time like this,” added Mr. Morrissey.

The northern half of the county was the hardest hit notably areas like Naas, Sallins, Clane, Caragh as well as Rathangan, parts of Kildare town and Kilteel.

The conditions worsened because Storm Emma created drifts of up to ten feet and the snow compacted very quickly.

For a thirty hour period from 2pm on Thursday to 6pm on Friday March 2 fire station staff remained in the station so they could respond more quickly to emergencies. Apart from KCC’s input which includes Civil Defence and the fire service, He thanked the ambulance service, gardai and the army.

He said an examination of the machinery could include replacing some of the council’s 18 two-wheel drive gritter trucks with four wheel drive models — as well as adding more front loaded shovels and snow ploughs to the storeroom. Coincidentally KCC is currently replacing a good deal of its machinery.