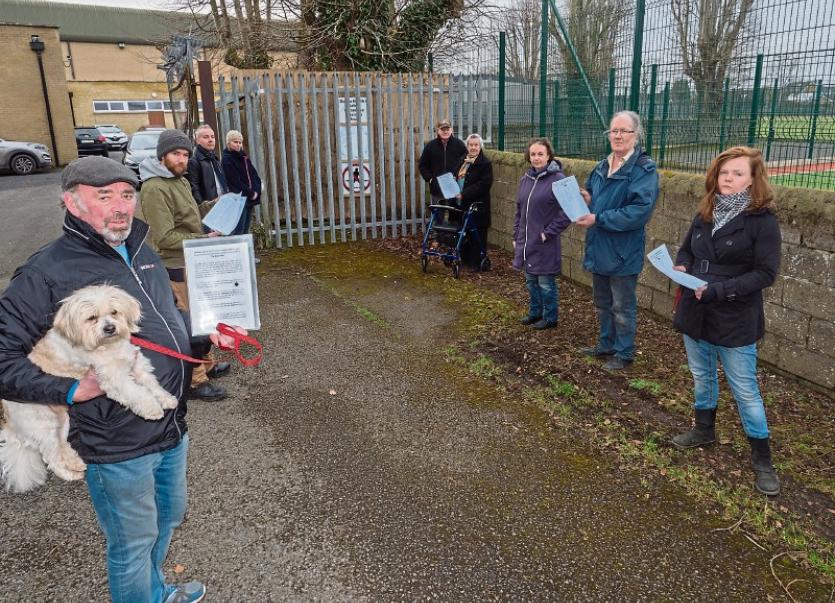 An online petition and Facebook campaign to secure access to a 150-year- old right of way across Newbridge College lands has gained huge traction with 486 signatures so far.

Residents in the Roseberry area of Newbridge said that access had been limited during recent building works at the school, but they were allowed to walk half way down. The community were of the view, that once the building works were complete, the pathway would be fully opened again.

However, local man, Jim Armstrong said that since Friday February 9, a barrier had been moved up to the top of the path, entirely blocking access.

He is concerned the walkway will be permanently blocked, denying locals access to an established right of way, which has existed 150 years.

“My mother and other elderly people use the path to go to the Church everyday as it is safe, and away from the busy road.

“Since they put up the barrier, my mother hasn’t been to church,” said Jim.

He said several residents had tried to contact the College but couldn’t get any answers.

The pathway leads from the Church in the college to Mill Lane.

The local community set up a Facebook page called Save Newbridge Black Path.

The Board of Governors of Newbridge College met yesterday and issued the following statement.

“Newbridge College is required, as are all schools, under Section 11 of the Children First Act 2015 and under the Child Protection Procedures for Primary and Post-Primary Schools 2017, to carry out risk assessments on a regular basis in relation to the College and its environs.” it said.

“As the construction of the new classrooms is now coming to an end, the College has carried out such a risk assessment.

“As part of this assessment the approaches within the private grounds of the College, including the Church, have been reviewed and surveyed.”

“Unfortunately, it has been found that there has been inappropriate behaviour along the path adjacent to the hockey pitches and dressing rooms. This poses a risk to the safety and welfare of the students. These concerns were brought to the Board of Governors and following a review of the situation, the decision was taken by the Board of Governors to remove this route to the Church. It is in these circumstances that this route is regretfully no longer available to the Church.”

The board said the alternative route along a public pathway, is lit at night, immediately outside the grounds of the College.

It re-emphasised its obligation to ensure the safety and welfare of students.”