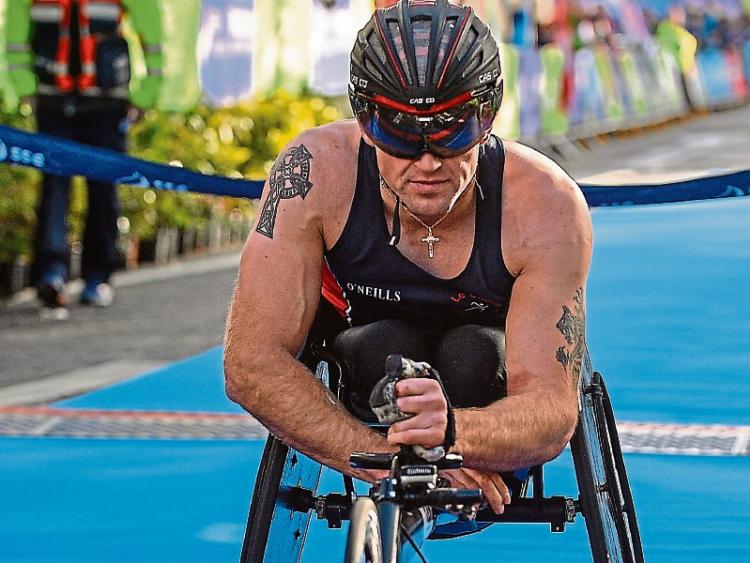 There was stunned silenced throughout a talk given by Caragh paralympic star Patrick Monahan when he opened up about his life changing car crash.

The Kildare man who has competed sucessfully in numerous marathons and at the Rio Olympics was, he admits, a typical young man at the time of his crash in 2007.

He recalls driving to work that morning, heading for Newbridge where he was working as an apprentice plumber.

He recounted how, coming around a bend only two kilometres from his own home, he lost control of his car which then hit a ditch.

He recounted how he was trapped in his car for about half an hour before he was removed and brought to hospital.

One particularly shocking picture he showed in his presentation was of his crumpled car with blood stains on the door.

Most shocking of all was that this was not the car he was driving on the morning that he suffered his spinal injury.

He revealed he’d been involved in another car crash six months previously, and he had only suffered minor injuries on that occasion.

He said that as he was waiting to be freed from his car following the second crash he had pictures of the blood stained car in the car with him and he could see his fresh blood mixing with the pictures.

“I had plenty of time to look at them and to realise how foolish I’d been,” he admitted.

He spoke then of being brought to hospital, Naas initially and then the Mater, and after a variety of tests, and surgery, of being told he would not walk again.

Initially when taken from the car he “didn’t have a clue what was wrong with” him.

It turned out he had broken his back in three places, as well as puncturing a lung and broken ribs.

He said there had been many tough days coming to terms with this. And he recalled in particular going to the Rehab hospital in Dun Laoighaire.

He said that his experience had given him plenty of perspective, and made him realise that his actions had consequences.

He concluded that that morning he had been free to take action, but now he would never be free of the consequences of his actions.