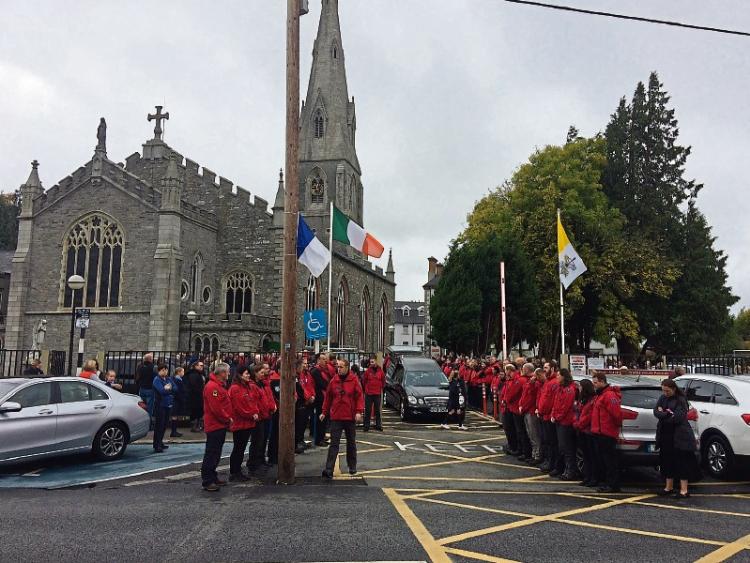 An Irish Coast Guard helicopter hovered at low altitude over Naas parish church, the pilot slowly lowering the cockpit in a final bow salute for Kevin Hallahan, this afternoon.

Dozen of volunteers working in emergency services, many of them colleagues from the Dublin Wicklow Mountain Rescue Team, formed a guard of honour as the hearse bearing his remains arrived at the church - and again when a DWMRT transport vehicle carried  the 43 year old on his final journey.

Some had travelled from as far away as Donegal  and a few brought their trained search dogs with them.

Mr. Hallahan (43) of Morell Manor has lived in Naas for some 15 years. He died accidentally while taking part in a rescue training event on a mountain in Snowdonia, Wales, a week ago today.

An engineer by profession, he was a highly regarded member of the DWMRT and has been married to New Ross native Catherine, mentor to the Naas GAA under 11 camogie team,  since 2006.

Kevin’s wicker coffin was carried into the church by his DWMRT colleagues, who also knew him as Wicklow 56, his unique call sign when deploying on training exercises or on search and rescue missions.

Naas parish priest Fr. Liam Morgan told the congregation that  the hearts of the community go out to Catherine and their “beautiful girls” Katie, Leah and Emily as well as Kevin’s parents Marie and Anthony, sister Pamela and brother Tony. Fr. Morgan was assisted by Fr. Toby Bluitt, the parish priest in Kevin's home town of Doneraile, Co. Cork.

He said that while the family had been hit by tragedy “so suddenly and so unexpectedly” it had been deeply touching to see the thoughtfulness of so many including neighbours, friends, staff and pupils at the Mercy Convent Primary School and his rescue colleagues “who watched over him when tragedy struck in the midst of darkness.”

He recalled Kevin and Catherine married eleven years ago and “theirs was a love that never dimmed or lost its sparkle.” He said this was renewed every day by the words “I Love You” spoken either face-to-face or on the phone. He said their love was renewed again, again and again by the arrival of their three children.

Addressing the girls he said the tragedy is a lot for them to take on. “You dad loved you very much and like Simba in The Lion King, your hero was your Dad and in time you will see yourselves looking like your Dad or Mum in a reflection and see that the circle of life continues for all of us.”

Kevin’s brother Tony  recalled a sibling who was full of life and had a great love of the outdoors. To laughter he recalled a camping trip which held more enthusiasm for his brother than for him.

“I was slow getting up one morning but he really wanted to be out with me; so he pulled me twenty metres down a hill with me still inside my sleeping bag.”

Shane Daly, a DWMRT Deputy Leader, thanked the rescue services in Wales who helped after Kevin‘s accident, especially the Caernarfon Coast Guard “who did a heroic job airlifting him off the mountain in very difficult circumstances.”

Mr. Daly said Kevin was a leader, an organiser and was larger than life. “If Kevin was with you, you just knew it was going to be a good day. We are all very proud to know him as a teammate and a very dear friend.” He was forever hatching new projects and buying new equipment, often at Ted Johnson’s in Naas.

“Sleep well, my friend,” he said, before concluding with radio communication words often spoken by Kevin: “Wicklow 56. Listening out. Still on the hill.”

The funeral mass was followed by cremation at Newlands Cross Crematorium.