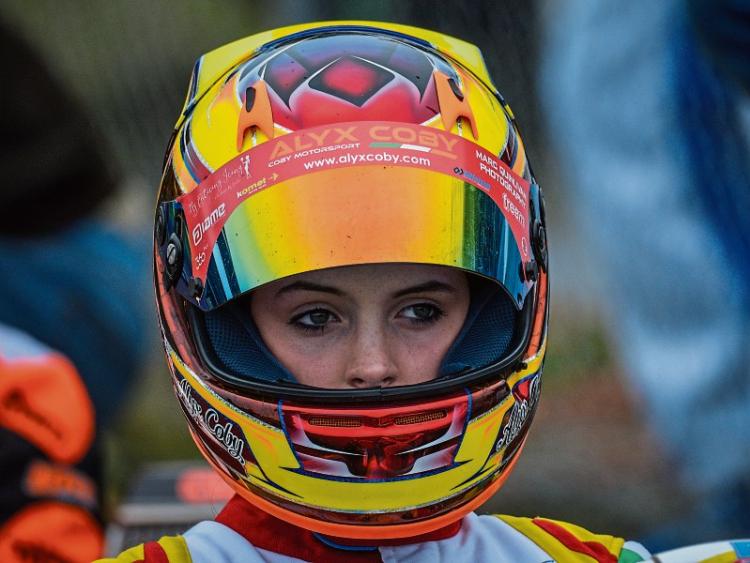 Thirteen year-old Alyx Coby, from Newbridge, has finished in third place in the Motorsport Ireland Karting Championship, earning a place at the World Championship in Le Mans next month.

Alyx was in good form as the Motorsport Ireland Karting Championship made the journey west to Tynagh in Co. Galway for the ninth and final round of this year’s Championship.

Competing in the IAME X30 Junior class, which caters for drivers aged 11 to 15, Coby headed into the weekend sitting in second place in the Championship and still with a chance of taking home the title.

After heavy rain overnight, the track was still damp as the day’s first qualifying heat got under way. The first-year student from Gael-Choláiste Chill Dara started in 2nd place and took the lead before the first corner. She pulled out a gap to the chasing pack before dropping to 2nd on lap 4 where she stayed until the final lap, crossing the line in 3rd place.

Starting the second heat in 7th place, Coby made her way up to 4th place by the end of lap 2. As the rain began to fall again none of the drivers were able to improve on their positions for the remainder of the race and Coby came home in 4th place.

With the sun making an appearance during the lunch break, the track had dried and was ready for slick tyres by the time the first of the finals began. Coby lined up in 3rd place on the grid, picking up one spot on the opening lap and began chasing down the leader.

At the beginning of the third lap a chasing kart misjudged the corner and collided with Coby’s kart, riding up over the back of it. The impact damaged Coby’s exhaust, forcing her to retire two laps later.

After being given the all-clear by the medical team following the collision in the first final, Coby lined up at the back of the grid for the final race of the season. Picking up two places at the start, she made her way up to 5th place by the end of the first lap and quickly got onto the back of the lead four karts.

At the end of lap 11, with three laps to go, she moved up to 3rd place as two karts ahead collided at the hairpin. Coby entered the final corner of the last lap in 3rd place but came out in front as the leaders ran wide and after a drag race to the line, she took the chequered flag first.

While trying to avoid the collision earlier in the race, Coby’s nose cone dropped. She was due to receive a five second time penalty; however, the Clerk of the Course initially deemed it the result of being left with nowhere to go and allowed her to keep the race win. Following an appeal by another driver this decision was reversed, demoting her to third place.

The Newbridge schoolgirl ended the season in second place on the overall points table, but with drivers dropping their three worst scores from the season she finished in third position – her best finish since she began racing five years ago.

The top three drivers in the Championship have qualified for a trip to the compete against 141 of the world’s best drivers at the IAME International Finals at Le Mans in France. Coby will be the first Irish girl to take part in the event which runs from October 9 to 15.