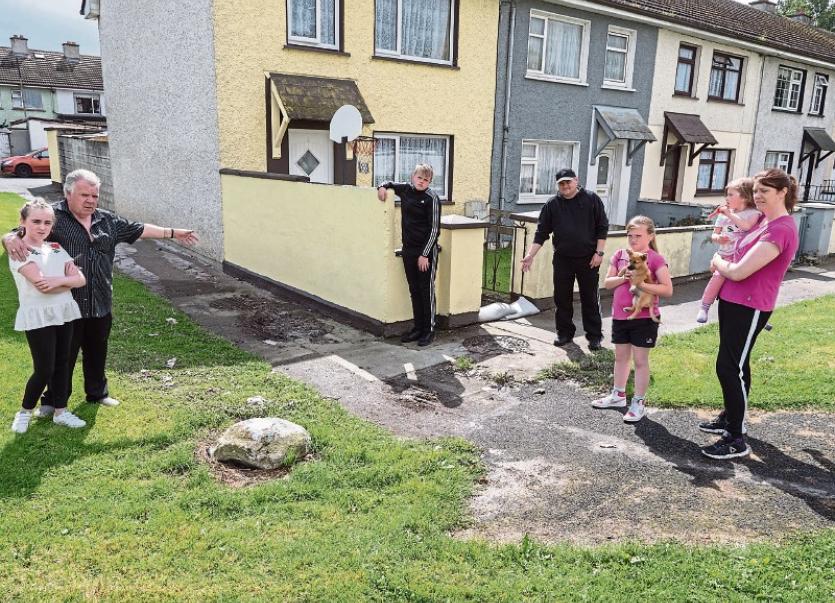 Some of the residents show the spot which is causing a sewage problem at Dara Park, Newbridge. Photo: Tony Keane

Residents of a Newbridge estate are fearful that future downpours could lead to sewage spilling from manholes into their homes after floods of wastewater, excrement and used toilet paper recently swamped their gardens, greens and pathways.

Heavy rain on Monday evening, August 14, caused sewage flooding in Dara Park, affecting a number of houses in the estate.

Last Friday morning, four days later, remnants of used toilet paper still stuck to the greens and raw sewage lay in clumps, including one such puddle outside Tommy O'Reilly's home.

“It just narrowly missed coming into the house,” explained Tommy, as he pointed at the sandbags on his doorstep.

Two years ago, his house was flooded and they had to replace all the downstairs floors.

“The council carried out a big job here and I thought this wouldn't be happening anymore. Now, we are terrified this is going to happen again and again.”

Tommy, who suffers from COPD and heart problems, is worried about the affect this may have on his family's health.

His neighbour, Mervyn Kavanagh was away on holidays and will be grateful for the goodwill of his neighbours and relations, who kept the sewage from his door.

“It still hasn't been cleaned up. We can't let the kids out to play. It's a health hazard,” he said.

With three kids aged between 3 and 12, Mr Kavanagh is concerned about the delay in removing the sewage.

“This shouldn't be happening in this day and age. It's a major health hazard. People shouldn't have to live like this.”

Cllr Joanne Pender said she had received numerous calls from local residents about flooding on August 14 in Dara Park and Lakeside Park. She said the whole system needed to be looked at and a permanent solution found.

Kildare County Council said it was a matter for Irish Water.

Irish Water issued a statement pointing out; “Due to the severity of rainfall within the Newbridge area (it is reported that 36mm of rain fell in a six hour period) there were a large number of wastewater collection network-related flooding incidents last Monday.

“These incidents were dealt with on the basis of severity of disturbance caused as unfortunately staff resources did not allow for each area to be cleaned up at the same time. Clean up operations have been completed in all affected areas.”

Irish Water said the scheme was successful on the night in question with no flooding coming from the surface water system.

"Flooding from the foul wastewater collection network arises when illegal connections are made to the foul network which allows surface water enter a system that has been designed to cater for foul wastewater flows only.”

Irish Water confirmed that the surface water and wastewater systems in Lakeside Park are separate systems and are not interconnected.

Last Monday morning, the day the statement was issued, Mr Burke said the clump of sewage outside Tommy O'Reilly's had been removed, but there was still sewage and toilet paper on the edges of pathways and in people's gardens.