Kildare bikers to head off on world tour 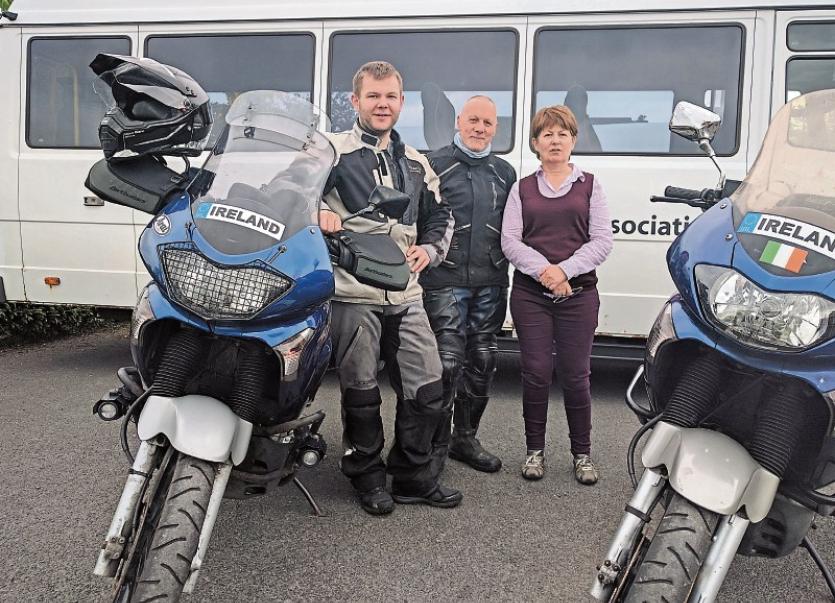 A 29 year old Kildare man and his motorcycling friend are to go on an around the world trip to help raise funds for a bus for The Irish Wheelchair Association in Clane.

Niall Conway, from Celbridge, an engineer with Ericsson, will take leave of absence motorcycle around the globe with Frank Seveno, a 72 retired Dublin teacher.

Four years ago, Niall’s mother had a brain hemorrhage and The John Sullivan Centre in Clane helped her a lot. “They have been very good. It is all about giving. The word thank you is not enough,” said Niall.

This Thursday, July 27, at Celbridge GAA, the IWA and the two bikers are holding a night of ‘Craic agus Ceol.’ The night will be a send-off celebration for Niall and Frank who leave on August 14.

Niall told us there are three key legs of the journey. They fly to Canada and take the highway from Montreal to Vancouver.

A flight from Vancouver will land them in Brisbane, Australia, from where they will take off towards Sydney and Phillip Island off Melbourne, then down along the south coast to Perth.

They then fly to India, via Delhi, into Pakistan (Lahore). “This is possibly the least safe element of the journey,” said Niall, who worked in Lahore before and has contacts in the country. They will head south to Karachi before heading on to Iran, where a 2,500 km trip will take them through three cities.

From Teheran, the will head to Turkey and hopefully onto Istanbul before heading towards Europe.

IWA spokesperson, Helen O’Connor said the Bike Ride is a part of a number of fundraising initiatives to raise much needed funds to purchase a new accessible bus. “Currently the Association has a fleet of four buses ranging from 15 years to 7 years old. The buses are on the road seven days a week collecting 52 people with disabilities from their homes and transporting them safely and securely to and from services, programmes, excursions or social activities on the specially adapted buses.

Ms O’Connor explained: “IWAs fleet of buses provide a vital service to people with disabilities.  Our transport fleet is a critical support that enables our members to participate in IWAs services and access other services they may require.”

She said they are hoping people will support Niall and Frank by logging on to: https://www.justgiving.com/fundraising/rtw2017 to make a donation or attending the event in Celbridge on July 27 to wish Niall and Frank well.

“This is a great opportunity to support IWA in order that the organisation may continue to have a real impact on the lives of local people with physical disabilities and others with reduced mobility.’

The IWA is a national organisation founded in 1960, dedicated to the achievement of fu8ll social, economic and educational inclusion and integration of people with physical disabilities as equal, independent and participative members of their communities and society. It  provides services and support to over 20,000 members nationwide. It has 2,000 registered volunteers and 2,221 staff.