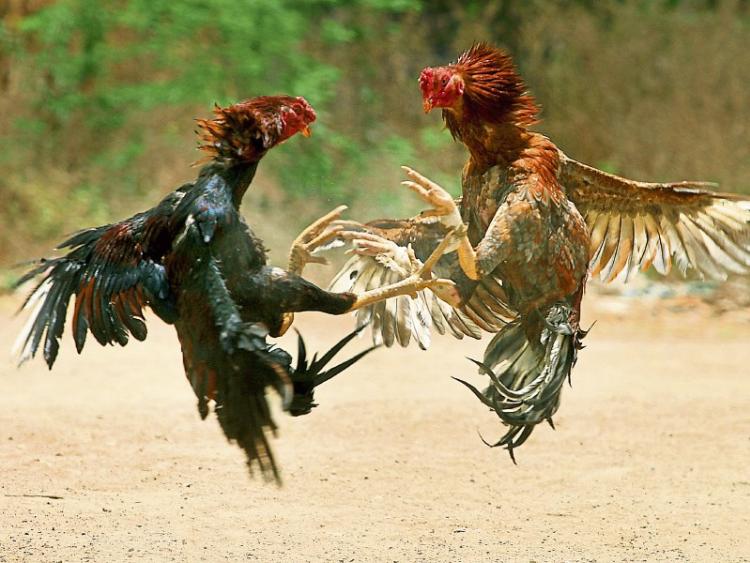 The ancient art of cockfighting died a hard death in Ireland, a look back through the Leinster Leader archives reveals

That ancient passtime of cockfighting, declared illegal by Act of Parliament at least half a century ago is dying a hard death in Ireland, the Leinster Leader reported on July 14, 1917.

Personally, we would sooner see a dog fight, but every man to his taste.

A cock fight was brought off one day recently between birds reared in Leitrim and Carlow, and the honours lay with the latter.

It seems that everybody knew a about it but the local Acting Sergeant, who thereby missed his breve.

Perhaps, though he was a wise man of his generation and did not interfere.

There were over 1000 people at the cock fight, who arrived by motor car and various other conveyances.

Meanwhile, the same issue of the paper reported that a huge motor car occupied, it is said, by a number of gentlemen who had been prominent with the victory of Mr. DeValera in Clane, passed through Kildare and Newbridge about noon on Tuesday on its way to Dublin.

A large flag was seen floating from the car which attracted much attention, cheers being raised at different points.

Late on Thursday evening, two large motors with flags passed through Newbridge in the direction of Dublin.

At about five o’clock on Thursday morning, a large Sinn Fein flag was seen to be floating from the top of Kildare Cathedral.

It was not removed at a late hour on Thursday evening.

On Wednesday, a Sinn Fein flag was displayed from the windows of the Club of the Naas Branch (Sean Connelly) Sinn Fein.

Another flag was found hoisted at the Harbour on Thursday morning, the paper reported.